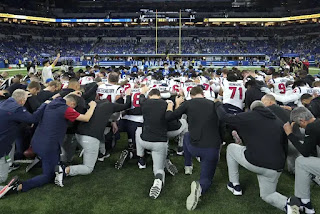 The Houston Texans and Indianapolis Colts gather on the field before their NFL football game in support of Buffalo Bills safety Damar Hamlin, Sunday, Jan. 8, 2023, in Indianapolis. (AP Photo/AJ Mast)


An emotional week for the NFL filled with fear, tears, prayer and uncertainty ended with exciting games, dramatic finishes and a celebration for Damar Hamlin.

When Hamlin left the stadium in an ambulance Monday night fighting for his life, football didn’t matter. A pivotal game between the Bills and Bengals suddenly was irrelevant.

The primary concern for players, coaches, the league and fans around the world became Hamlin’s health. The 24-year-old Bills safety went into cardiac arrest after making a tackle and needed to be resuscitated on the field in a scary scene witnessed by millions watching “Monday Night Football.”

For a couple days, it was unknown when the NFL would resume playing. The league announced Wednesday that Week 18 was still on schedule, and Hamlin made remarkable progress in his recovery by Thursday. He spoke to teammates for the first time Friday, telling them: “Love you boys.”

Inspired by his motivational words, the NFL community returned to work filled with hope instead of heavy hearts.

The league honored Hamlin in various ways this weekend, dedicating all the games to him and recognizing the first responders and doctors who saved his life.

Then, players gave Hamlin the ultimate tribute with their performance.

Nyheim Hines returned the game’s opening kickoff 96 yards for a touchdown in front of a charged-up crowd at Buffalo’s Highmark Stadium on Sunday.


“We’ve had so many prayers and so much support and to be able to start the game like that, it was amazing,” Hines said. “All that was for him. I felt like he was out there with us. .... This is bigger than me. It’s bigger than the 10 guys blocking for me.”

Hines did it again in the third quarter, taking a kickoff 101 yards for a go-ahead score in a 35-23 win over the New England Patriots that locked up the AFC’s No. 2 seed for the Bills (13-3).

The Bills hadn’t returned a kickoff for a TD since Oct. 20, 2019, a span of nearly three years and three months. No. 3 just happens to be Hamlin’s number and it was on display everywhere from Buffalo to Green Bay on outlines on the 30-yard line to T-shirts, sweatshirts and jackets worn by players and coaches across the league.

Josh Allen choked up talking about it.

“It was just spiritual,” Allen said. “I was going around to my teammates saying: ‘God’s real.’ You can’t draw that one up or write that one up any better. ... Pretty cool.”

Another Josh Allen made the defensive play of the season for Jacksonville on Saturday night, returning a fumble 37 yards for a TD with 2:51 remaining to help the Jaguars beat Tennessee 20-16 and secure their first AFC South championship since 2017.

The Jaguars (9-8) completed a worst-to-first turnaround and became the third team in NFL history to reach the playoffs after starting the season 4-8 or worse.

On Sunday night, the Green Bay Packers (8-9) had a chance to become the fourth team to do it. But Aaron Rodgers threw an interception late in the fourth quarter and the Detroit Lions beat the Packers 20-16 to give the Seattle Seahawks (9-8) the NFC’s final wild-card spot.

Rodgers soaked in the atmosphere and slowly walked off Lambeau Field perhaps for the last time in his career with his arm around his buddy, wide receiver Randall Cobb.

Though he has two years remaining on a $150 million, three-year contract, there’s a possibility the 39-year-old Rodgers may retire or ask for a trade.

The offseason is the time to appreciate Rodgers’ career. This weekend was all about Damar Hamlin.