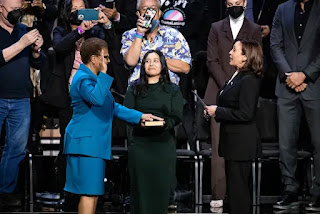 LOS ANGELES (NEWS ONE) -- Karen Bass is already making powerful moves in her new role as the Mayor of Los Angeles. On Sunday, the 69-year-old politician announced plans to move the city’s homeless from tent encampments into hotels and motels through a new housing program set to launch Tuesday.


During an interview with NBC’s “Meet the Press,” Bass shared more details about the forthcoming initiative, noting how the program would not “address everybody, but it is going to address, hopefully, a significant number,” according to AP News. Under the plan, none of the city’s homeless community will be forced to move from their current location, Bass clarified. “This is not coercing people. This is not ticketing people or incarcerating people. This is moving people from tents to hotels or motels,” she added.

Homelessness is a big issue in Los Angeles

Solving the city’s homelessness crisis has been at the top of Bass’s priority list. On her first day as mayor, Bass promised to build more housing to help quell the issue, allocating nearly $1.2 billion of the city’s budget. Nearly 40,000 people experience homelessness in Los Angeles. The crisis disproportionately impacts Black, Latinos, and the formerly incarcerated.

Under the initiative, Karen Bass hopes to house over 17,000 homeless people in her first year. Upon taking office, the former House representative said that she would work closely with officials to train outreach workers to move homeless communities off the streets. The teams will include trained outreach workers, medical and mental health professionals, and social workers. The program will also create job opportunities for the formerly unhoused to work directly with street teams. “As individuals with lived experience, they play a vital role as trusted messengers in helping others find the same stability they did,” her website notes.

Karen Bass’s passion for homelessness advocacy extends back to her early days with the Community Coalition. The former social worker helped push for converting motels into housing for the homeless in the 1990s, decades before COVID-19 spawned the creation of Project Roomkey, a federally funded homeless relief initiative in the state of California.
Karen Bass Los Angeles News Desk Southern California