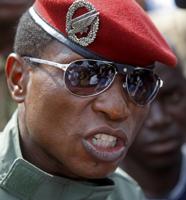 CONAKRY, GUINEA (AP) — Guinea’s former junta leader Moussa “Dadis” Camara, took the stand for the first time Monday to testify about his role in a stadium massacre by the military 13 years ago in which at least 157 people were killed and dozens of women raped.

Camara is one of 11 men charged with the murders and rapes in the stadium attack on Sept. 28, 2009 in which security forces fired at unarmed demonstrators protesting the junta leader’s plans to run for president. Camara had seized power in a coup one year earlier.

Human rights investigators interviewed witnesses and reported that Camara’s aides were at the stadium and did nothing to stop the violence. Witnesses said that the presidential guard blocked the exits and then entered the stadium and opened fire.

Several months later Camara survived an assassination attempt and fled to Burkina Faso where he lived in exile for more than a decade before returning to stand trial in Guinea.

Dressed in a garment of woven Burkina Faso cloth, Camara sounded nervous and bitter as he pleaded his innocence in front of a packed courtroom of several hundred people.

“If I’m here before you it’s because of my patriotism otherwise I would not have agreed to come,” he said. Camara said he was sleeping during the early hours of the attack, awoken at 11 a.m. when he was told that demonstrators had been killed.

As commander in chief at the time, rights groups say Camara has to take responsibility for what happened.

“They surely (acted) on this order. It is up to him to prove that he did not give the order and took the necessary measures to prevent the massacre,” said Alseny Sall, communications officer for the Defense of Human Rights and Citizenship, a local rights group. “Simply saying that he is innocent is not enough, it must be motivated by clear and precise explanations,” he said.

Camara says he was the target of an assassination plot by former President Alpha Conde who was ousted in a coup last year.

For years, Guinea’s government sought to prevent Camara’s return, fearing it could stoke political instability. However, another coup last year put a military junta in power that was more amenable to Camara’s repatriation.

Camara is the 9th accused to testify with two people remaining. The trial is expected to last at least until the end of the month.

Meanwhile, families of the victims say they believe justice will prevail.

“Eventually the truth will be known,” said Aissatou Sow. The 34-year-old’s fiancee was killed during the attack. “I did not want him to go to the stadium that day. I said it is dangerous and he told me not to be afraid,” she said.
AP News Guinea News Desk West Africa