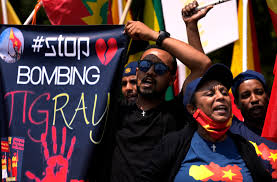 NAIROBI, KENYA (AP) — Eritrean troops have continued killing dozens of civilians in Ethiopia’s Tigray region and committing other abuses weeks after the two main warring parties signed a peace deal, according to an official document seen by The Associated Press.

The forces from neighboring Eritrea, which has fought alongside Ethiopia’s military in the two-year conflict, killed 111 civilians and injured another 103 in the eastern zone of Tigray, according to information compiled between Nov. 17 and 25 by the Tigray Emergency Center. Regional government offices, United Nations agencies and non-governmental organizations participate in the ECC.

The report also says there were 39 “kidnapping/disappearances” of civilians by Eritrean forces and “widespread looting,” including the destruction of 241 houses. One of the kidnapped civilians was later found dead.

The abuses threaten to harm the deal struck in South Africa between Ethiopia’s government and Tigray leaders on Nov. 2. Tigray’s forces are supposed to disarm within 30 days of the agreement, but they now say they will hand over their heavy weapons only after Eritrea’s military leaves the region. Eritrea, however, is not a party to the peace talks.

Last week the AP reported that Eritrean forces and troops from Ethiopia’s neighboring Amhara region were still looting and carrying out mass detentions in the Tigray region of more than 5 million people.

Eritrean troops entered the conflict alongside Ethiopia’s government when fighting broke out in November 2020. They have been accused of widespread human rights abuses, including gang rapes.

In a rare public statement on the issue last week, the African Union mediator who brokered the peace deal, Olusegun Obasanjo, called on “foreign troops” to leave Tigray.

Aid has started to reach Tigray since the deal was signed, but some aid workers have said convoys of humanitarian supplies have been blocked by checkpoints manned by Eritrean soldiers. Currently, aid workers can only access 54 of 104 camps for displaced people in Tigray, according to the ECC report.

Yet some observers remain hopeful that the deal will be implemented. On Thursday, United Nations Secretary-General Antonio Guterres said the conflict had killed more people than the war in Ukraine and described the deal as an “an opportunity that Ethiopia cannot miss, that Africa cannot miss, and that the world cannot miss.”

A joint committee comprising representatives from the federal government, Tigray leaders and the AU and tasked with drawing up plans for disarmament held its first meeting in the Tigray town of Shire on Wednesday. The government’s communication service said its work has been “delayed due to technical factors.”
AP News Ethiopia News Desk Tigray Region