Cambridge University To Return Over 100 Looted Benin Bronzes To Nigeria 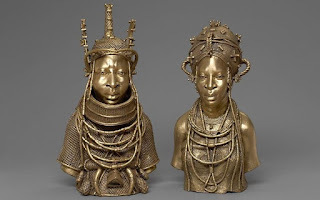 The University of Cambridge will return more than 100 looted Benin bronzes to Nigeria.

The artefacts, which are mainly made of brass but also include some ivory and wooden objects, were taken by British armed forces during the sacking of Benin City in 1897.

A university spokesperson said: “The Charity Commission has considered and approved the return of 116 historical objects, often referred to as the Benin bronzes, from the University of Cambridge’s Museum of Archaeology and Anthropology to the National Commission of Museums and Monuments (NCMM) of Nigeria.

“The university is now working with the commission to finalise next steps regarding these Benin bronzes, and we will communicate these in due course.”

She added that some artefacts would remain in Cambridge “on extended loan” to ensure “this west African civilisation continues to be represented in the museum’s displays, and in teaching for school groups”.

She explained: “Those that return physically will be transferred to the National Commission for Museums and Monuments, as is required legally by the Republic of Nigeria, and an approach formally supported by the Oba of Benin.”

In the 1897 attack, the British burned the city’s palace and exiled Benin’s Oba, or king.

Thousands of brasses and other works – known collectively as the “Benin bronzes” – were taken and later sold off in London to recoup the cost of the military mission.

The artefacts ended up being scattered around the world in museums in the UK, Europe and the US, with claims for their restitution dating back to the mid-20th century.

The announcement by Cambridge comes as institutions and museums come under mounting pressure to return looted artefacts. In July, Germany handed back two bronzes and put more than 1,000 other items from its museums’ collections into Nigeria’s ownership.

A few months later in October, the culture minister of Nigeria, Lai Mohammed, urged the British Museum to follow the example of the Smithsonian Institution, which returned ownership of 29 Benin bronzes to Nigeria.

It followed a formal request last year by Mohammed’s ministry for the return of Benin artefacts from the British Museum. Referring to their return he said: “It’s not if, it’s when.”

He added: “They will eventually have to return these because the campaign is gaining strength by the day and, when they look at what other museums are doing, they will be compelled to return them.”

Last month, the Horniman Museum, in south London, returned looted Benin bronzes to Nigeria. This followed Jesus College, the University of Cambridge, which returned a bronze to Nigeria in October 2021.

The University of Aberdeen also handed back a bronze, depicting the head of an Oba, at a ceremony held in October last year.

Earlier this month, it was reported that the chair of the British Museum, George Osborne, had held talks with the Greek prime minister, Kyriakos Mitsotakis, regarding the possible return of the Parthenon marbles.

However, Downing Street has said there were no plans to change the law that prevents the British Museum from handing the Parthenon marbles back to Greece.
READ ORIGINAL STORY HERE
News Desk Nigeria The Guardian