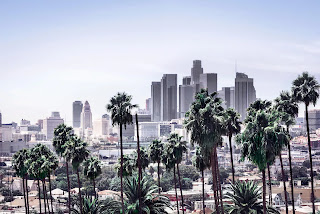 BY THOMAS IRWIN AND ALIX OLLIVIER
The incoming class of Los Angeles elected officials should legalize denser buildings and expedite approvals in transit-oriented areas to alleviate the housing crisis.
Few issues are more consequential to Angelenos than the current housing crisis. Rents increased as much as 22% last year, and the median home price has reached $966,000. More lower-income Angelenos are being forced out of the city, and the number of tent encampments is increasing in many of the city’s neighborhoods.

The root cause of this crisis is simple: the long-running failure of the city to build enough new housing to match its growing population. Our incoming elected officials must make solving the Los Angeles housing shortage a priority. To do so, they should embrace and strengthen the city’s Transit-Oriented Communities (TOC) program.

Since 2017, the program has granted incentives to build housing around transit, with over 36,900 units created, including almost 8,100 affordable housing units. A significant amount of money is on the line as the county Metropolitan Transportation Authority plans to invest $400 billion in funds over the next 30 years on transit.

But Metro needs more than financial investment to increase ridership. Transit use in Southern California was relatively stagnant from 2000 to 2013, and has steadily declined ever since. Research shows that one of the best ways to increase ridership is when people live within walking distance of high-quality transit.

With a few policy changes, Los Angeles can alleviate both our housing crisis and our notorious traffic.

The first way to expand the TOC program is to legalize apartment construction in all land around transit. Many of the city’s metro stops are in neighborhoods zoned exclusively for single-family homes, which is the most expensive type of housing in Los Angeles. Prohibition on apartment construction means that at metro stations like Racho Park, for example, only a few dozen privileged households owning multi-million dollar homes have walking access to Metro.

Ending apartment bans around transit stops would maximize the city’s transportation investments while driving down the cost of housing.

A second tweak to the TOC program would be to grant developers the flexibility to build denser and more affordable projects near transit. In 2018, an LAplus and UC Berkeley study found that developers rarely used their TOC incentives to build taller structures. The city’s building code requires structures over 85 feet to use more expensive steel and concrete materials, making it more difficult to pencil out projects profitably.

Encouraging affordable housing would ensure that transit ridership would be accessible to all Angelenos.

Finally, TOC projects should undergo a fully expedited review process. Slow approval of housing has a double cost: it keeps units off the market for longer, while the delay raises the cost of financing buildings, which means higher rents when buildings finally come online. In Los Angeles, this happens through “Site Plan Reviews” where any building over 50 units is subjected to an extensive approval process.

In theory, a site plan review increases social and environmental benefits by allowing a community to give input on a project. In practice, it’s simply a tool for delay. This review process is redundant because TOC projects already have the clear benefits of being near transit and including subsidized housing. By exempting this category of housing from discretionary review, development times would be shortened, lowering development costs and, over time, rents for tenants.

These common-sense changes would allow Los Angeles to expand its transit network and supply of affordable housing at the same time.