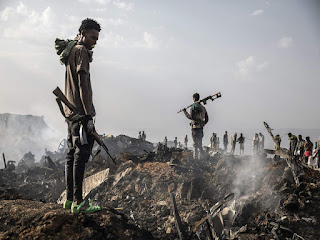 Tigray Defense Force fighters survey the burning wreckage of an Ethiopian Air Force plane downed a few hours earlier, June 23, 2021
BY RODNEY MUHUMUZA
KAMPALA, UGANDA (AP) — A U.N. official is urging tech companies to do everything possible to stop the onslaught of hate speech fueling the war in Ethiopia’s north, where a violent war pits federal troops and their allies against Tigray’s rebellious leaders.

Inflammatory language by political leaders and armed groups in the Tigray conflict “continues unabated,” Alice Wairimu Nderitu, U.N. special adviser on the prevention of genocide, said in a statement Wednesday.

“There is discourse often propagated through social media, which dehumanizes groups by likening them to a ‘virus’ that should be eradicated, to a ‘cancer’ that should be treated because ”if a single cell is left untreated, that single cell will expand and affect the whole body” and calling for the “killing of every single youth from Tigray” which is particularly dangerous, the statement said.

Fighting resumed between Tigray forces and federal troops in August, bringing an end to a cease-fire since March that had allowed much-needed aid to enter the region. Eritrean troops are fighting on the side of Ethiopia’s federal military.

Fighting has intensified in recent weeks as federal troops try to take control of towns in Tigray. Earlier this week they took control of three towns, including one hosting a large number of internally displaced people in the Shire area.

Aid distributions are being hampered by a lack of fuel and a communications blackout in Tigray. The AP reported Saturday that a U.N. team found there were “10 starvation-related deaths” at seven camps for internally displaced people in northwestern Tigray, according to an internal document.

The conflict, which began nearly two years ago, has spread from Tigray into the neighboring regions of Afar and Amhara as Tigray’s leaders try to break the blockade of their region.

The head of the continent-wide African Union and the U.N. secretary-general are urging the warring parties to stop fighting and meet for peace talks that were meant to start earlier this month in South Africa. The talks were delayed because of logistical issues.

“The conflict has reached new worrying levels of violence,” with widespread rape and sexual violence, Nderitu said in the statement that cited “horrifying levels of hate speech and incitement to violence.”

“The atrocious abuses taking place are spurred by the deluge of ethnically motivated hate speech that is propagated online,” the statement said, urging tech companies and their social networks to use “all tools available to stop the spread of hate speech that could constitute incitement to discrimination, hostility, or violence on their platforms.”

Millions of people in Tigray, Amhara and Afar have been uprooted from their homes and tens of thousands of people are believed to have been killed in the conflict that started in November 2020.
Africa African Union Associated Press Ethiopia News Desk Tigray Region