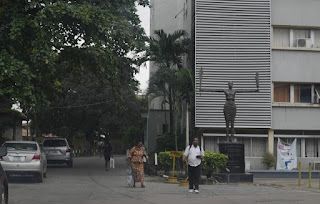 FILE- People walk past the Faculty of law department of the University of Lagos in Nigeria, Wednesday Aug. 17, 2022. Nigerian lecturers have called off their strike embarked upon in February to protest issues relating to their welfare, according to Emmanuel Osodeke, president of the Academic Staff Union of Universities, or ASUU. (AP Photo/Sunday Alamba, File)
ABUJA, NIGERIA (ASSOCIATED PRESS) — Nigerian lecturers have called off their 8-month-long strike to protest their conditions, the union’s president told The Associated Press.

The strike was suspended early Friday after a meeting of union leaders considered compromises agreed upon with the government, said Emmanuel Osodeke, president of the Academic Staff Union of Universities.

He did not give further details about the decision which came days after the union met with Nigerian lawmakers.

The union, however, warned that its issues have not been resolved.

“While appreciating the commendable efforts of the leadership of the House of Representatives and other patriotic Nigerians who waded into the matter, NEC (national executive council) noted with regrets that the issues in dispute are yet to be satisfactorily addressed,” the union said in a statement issued Friday.

University strikes are common in Nigeria but the latest is one of the longer ones in many years. It disrupted learning in almost all of Nigeria’s more than 100 public universities with an estimated 2.5 million students.

Most lecturers in Nigerian universities are members of the academic staff union, which meant no other teachers could be found for students.

The lecturers embarked on the industrial action at a time when Nigeria’s education sector that is struggling to recover from a COVID-19 lockdown and after an earlier strike that lasted for most of 2020. They are demanding a review of their conditions of service including the platform the government uses to pay their earnings and improved funding for the universities.

Not all the demands have been met, the union said, but two local courts have directed them to return to work while negotiations continue.

The news of the suspension of the strike excited many students who are eager to return to classes.

“I am a little bit happy because I was not expecting to resume my academic session till next year,” said Adenekan Ayomide, a second-year student at the University of Abuja who has been working as a taxi driver since the strike began.
Associated Press News Desk Nigeria