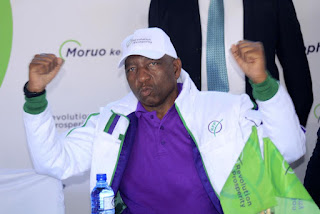 MASERU, LESOTHO (AP) — Lesotho’s businessman-turned-politician Sam Matekane is set to become the southern African country’s next prime minister after cobbling together a coalition headed by his Revolution for Prosperity party.

Matekane, 64, announced the new three-party coalition Tuesday in the capital, Maseru. His party will team up with two smaller parties, the Alliance of Democrats and the Movement for Economic Change parties, to secure a parliamentary majority needed to form a government.

Matekane, whose party was only launched in March this year, won 56 of the legislature’s 120 seats in last week’s general election. That was five shy of the 61-seat threshold required for any party to form a government on its own.

Although he had emphasized the importance of governing alone to enable his party to implement what he called a “developmental agenda,” Matekane joined forces with other parties after he failed to secure an outright win. Together the two smaller parties are bringing 9 seats into the new coalition, giving Matekane’s government a slim majority of 65 seats.

Addressing the media Tuesday, Matekane said he chose the two parties because they share the same vision of cutting down on government expenditure and improving the delivery of government services to Lesotho’s population.

Matekane is a newcomer to politics but the leaders of the two partner parties bring experience in government. Alliance for Democracy leader Monyane Moleleki served as deputy prime minister from June 2017 to May 2020. Movement for Economic Change leader Selibe Mochoboroane was development planning minister in the outgoing All Basotho Convention-led government which will hand over power when Matekane is sworn-in to office on a date to be announced.

Matekane said the coalition’s immediate tasks will be “reining government expenditure, stabilizing the economy and uniting the nation.” Lesotho has been plagued by chronic instability and widespread poverty. He said he would hold a weekend retreat with coalition partners to map the way forward.

Hundreds of people lined the streets near Matekane’s offices to celebrate his announcement of a new government.

Commenting on Matekane’s victory in his first election, National University of Lesotho political science lecturer Tlohang Letsie said his new party won because the electorate was fed up with the political status quo.

“The votes came from a place of anger ... The election outcome is a clear message to all political parties that when people choose them to govern, they expect them to deliver,” he said.

Matekane’s “incoming government must deliver, the people’s expectations must be met,” Letsie said.

“I want the new government to create jobs. Previous governments failed the people, they only sought to promote and serve their own interests,” Mabuse said. “I’m happy the Revolution for Progress has won because we need new players. We need them to create jobs.”

He said Matekane and his party “should be warned that if they disappoint us, we won’t hesitate to dump them the same way they did the parties that we have ditched.”
Associated Press Democracy Lesotho News Desk