EXPLAINER: Why The British Public Is Not Choosing Its Leader 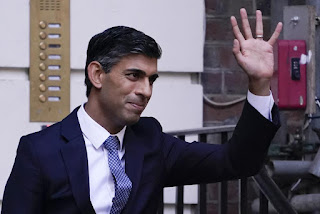 Rishi Sunak leaves the Conservative Campaign Headquarters in London, Monday, Oct. 24, 2022. Rishi Sunak will become the next Prime Minister after winning the Conservative Party leadership contest. (AP Photo/Aberto Pezzali)
LONDON (AP) — Observers of British politics can be forgiven for scratching their heads in recent weeks as they watch the country reel through prime ministers without holding an election.

While the opposition Labour Party is demanding an election, the governing Conservatives have just chosen another leader from within their own ranks — Rishi Sunak, the third prime minister since September. They have the right to do so because of the way Britain’s parliamentary democracy works.

Britain is divided into 650 local constituencies, and during an election voters tick a box for the representative they want to become their local member of Parliament. In most cases, this will be a member of one of the country’s major political parties: the Conservatives, the Labour Party, the Liberal Democrats and the Greens.

The party that wins the majority of seats in the House of Commons gets to form a government, and that party’s leader automatically becomes the prime minister. While coalitions are possible, Britain’s voting system favors the two largest parties — the Conservatives or Labour. In most cases a single party will take an absolute majority of seats, as is the case for the Conservatives in the current Parliament.

The party of government can change leader according to its own rules, and that person becomes prime minister without the need for a national election.

WILL THERE BE A GENERAL ELECTION SOON? The last general election in Britain was in 2019 and constitutionally another is not required until 2024.

But with the selection of a third prime minister by just a tiny proportion of the population, a lot of Britons are beginning to wonder why they are not getting a chance to influence who their next leader is. The clamor for a general election in the near future is only likely to get louder.

The prime minister has the power to call an election earlier, but with the Conservative Party trailing well behind the opposition Labour Party in the latest polls, Sunak is unlikely to do so.

Lawmakers can also trigger an election by winning a vote of no-confidence in the government in the House of Commons, but that would require many Conservatives to vote against their own party’s government.