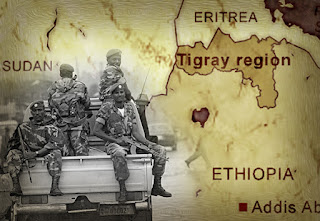 NAIROBI, KENYA (AP) — An airstrike in Ethiopia’s northern Tigray region killed at least five civilians during a major religious holiday earlier this week as the revived war continues, according to humanitarian workers and an internal document seen by The Associated Press.

The airstrike hit the town of Adi Daero in northwestern Tigray on Tuesday morning, also injuring 16 civilians and destroying several homes, the document by a non-governmental organization said.

Humanitarian workers in the Tigray capital, Mekele, and the region’s second-largest city, Shire, 25 kilometers from Adi Daero, confirmed the deadly attack. One of the Shire workers said fighter jets attacked both Adi Daero and Shire almost simultaneously. No one in Shire was injured, while some of the injured from Adi Daero were brought to Shire, the worker said.

All spoke on condition of anonymity for fear of retaliation.

In a statement Thursday, Tigray forces accused the air force of neighboring Eritrea of striking Adi Daero and killing “a number of civilians.” Eritrean forces are fighting alongside Ethiopia’s military in Tigray.

The AP was unable to verify who was responsible for the strike. Satellite imagery shared this week by Maxar Technologies showed a military buildup inside Eritrea near the border with the Tigray region.

Several airstrikes have been reported in Tigray since fighting resumed in August after a months-long lull in the fighting. Humanitarian aid to the long-blockaded region of more than 5 million people has again been cut off.

“We’re not moving any trucks in presently” and no staff has been able to enter or leave Tigray since Aug. 24, the World Food Program’s regional director for East Africa, Michael Dunford, told a think tank on Thursday, adding that there is a “real need for the offensive to end, for the fighting to stop.”

He said 89% of people in Tigray have limited food capacity and more than 40% are “acutely food insecure.”