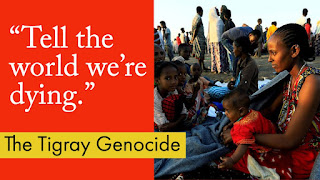 Image via Omna Tigray
WASHINGTON (AFP) -- Mike Hammer, the US special envoy for the Horn of Africa, will head this weekend to Ethiopia and "convey that all parties should halt military operations and engage in peace talks," says White House.

The United States has dispatched an envoy to Ethiopia to seek an end to renewed fighting and condemned neighbouring Eritrea for re-entering the conflict in the northern region of Tigray.

Mike Hammer, the US special envoy for the Horn of Africa, will head this weekend to Ethiopia and "convey that all parties should halt military operations and engage in peace talks," White House Press Secretary Karine Jean-Pierre said on Friday.

"We condemn Eritrea's re-entry into the conflict, the continuing TPLF offensive outside of Tigray and the Ethiopian government's air strikes," she told reporters, referring to the rebel Tigray People's Liberation Front.

Fighting resumed last week in the northern region after a five-month lull, dashing hopes of peacefully resolving the nearly two-year war and of ending a humanitarian crisis in which Tigray has suffered widespread hunger.

"There is no military solution to the conflict," Jean-Pierre said.

"All parties should exercise restraint and we urge de-escalation by all actors, particularly so that there can be a resumption of humanitarian relief and basic services to all parties in need."

Hammer, a veteran US diplomat, took on the role in June and the following month visited Ethiopia in a bid to help launch peace talks, which never began due to disputes between the government and TPLF even while the ceasefire was holding.

The two sides have traded blame for starting the latest round of hostilities.

The TPLF, once Ethiopia's dominant force, has said that historic rival Eritrea again sent in forces as part of a major offensive with Ethiopian troops.

Eritrea, one of the world's most closed nations with one of its most authoritarian governments, has been accused of heinous violence in the conflict.

Amnesty International said that Eritrean forces at the start of the conflict in November 2020 massacred hundreds of civilians in the ancient city of Axum.

After months of denial that Eritrean troops had crossed the border, Ethiopian Prime Minister Abiy Ahmed in March 2021 admitted to their presence and promptly announced their departure.

Ethiopia's envoy calls on US to condemn rebels

Ethiopia's ambassador in Washington, Seleshi Bekele, met on Thursday with senior officials including Deputy Secretary of State Wendy Sherman and called on the United States to condemn the TPLF which he said was to blame for breaking the ceasefire.

Access to northern Ethiopia is severely restricted and Tigray has been under a communications blackout for over a year.

Combat had been concentrated around the southeastern border of Tigray, with the rebels pushing into the neighbouring Amhara and Afar regions, sending residents fleeing.

The fighting so far has not terminated relief efforts, with UN spokesperson Stephane Dujarric saying that 17 trucks distributed fertilizer in Tigray this week for farmers in their planting season.

Abiy sent troops into Tigray to topple the TPLF in November 2020 in response to rebel attacks on federal military camps. The government in Addis Ababa cites the deadly attack on the Dansha ­barracks and other army facilities to justify its offensive against TPLF since then.
Africa African Union Ethiopia News Desk United States