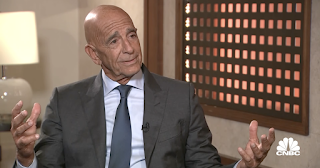 NEW YORK (NY DAILY NEWS) -- After Donald Trump won the 2016 election, his mega-rich pal Tom Barrack started formulating a plan with officials at the United Arab Emirates on how to influence U.S. policy — and was asked to provide information about who’d be tapped for crucial cabinet positions, federal prosecutors allege.

“The defendants saw an opportunity, an opportunity to use Barrack’s unique access to Donald Trump to gain power and money for themselves,” Assistant U.S Attorney Hiral Mehta said Wednesday, in his opening argument at Barrack’s Brooklyn Federal Court trial.

Barrack, 75, and his assistant, Michael Grimes, 29, are accused of working on behalf of UAE agent Rashid Al-Malik Alshahhi, to further the country’s interests from 2016 to 2018, all while never registering with the U.S. government as a foreign agent.

When the FBI questioned Barrack in 2019 about whether Alshahhi requested he take action on behalf of the UAE, “he lied to them, again and again,” Mehta said.

Barrack was motivated by greed, the prosecutor said, pointing out that a fund controlled by the UAE invested $74 million in his private equity company.

He started working with Alshahhi in 2016, when Trump was still a candidate, and at the UAE’s bidding, Mehta alleged, Barrack tried to slip a reference to the UAE’s crown prince into a national campaign speech.

Trump’s campaign cut the reference, though, and Barrack became upset, telling campaign staff “they were being imbecilic,” according to Mehta. The campaign wound up having Trump make a reference to the U.S.’s ”Gulf allies.”


After Trump won, the UAE had Barrack set up a call with Trump and Crown Prince Mohammed bin Zayed and asked him for intel about Trump’s picks for CIA director, secretary of defense, secretary of state and national security adviser, Mehta said.

Barrack and Grimes traveled to the UAE in 2017, after Barrack was picked to chair Trump’s inaugural committee, where they “discussed designing a plan” to influence the U.S. government for the next 100 days, six months, one year and four years, Mehta said.

Barrack’s lawyer, Michael Schachter, countered that the businessman was nobody’s agent but his own.

“Everything that Tom did, you’re gonna see that he did as his own man, making his own decisions.”

As a Lebanese immigrant, Barrack has strong views on the Middle East and believed the UAE should be lauded for fighting alongside the U.S. against ISIS, and he didn’t hesitate to make those views known, Schachter said.

He also didn’t actually offer up his predictions on who Trump would pick for his cabinet, Schachter said.

Grimes’ lawyer, Abbe Lowell, said his client met Barrack as a teenage DJ at a party for Barrack’s son, and started working for Barrack’s company Colony Capital when he was 18, first as an intern, then an “analyst,” then a “vice president.” In reality, he was Barrack’s “gofer,” Lowell said.

Grimes did everything from gathering research, to bringing his boss “coffee and smoothies every day,” to making sure his plane was stocked with food and taking care of the luggage after flights, his attorney said.

“He was lucky to have that kind of opportunity. Lucky, that is, until the prosecutors charged him with being some kind of foreign agent,” Lowell said. “Nothing he did would reflect a knowing and intentional agreement to become a foreign agent.”
Donald Trump New York News Desk