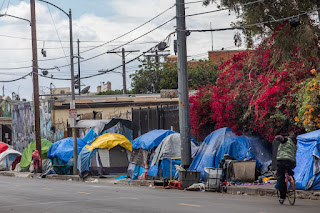 The settlement would also provide county operational and service support in every shelter and housing project established by the city; give access to unlicensed beds for homeless people suffering from mental illness within the city; add 300 licensed mental health/substance use disorder beds; and increase the number of outreach teams to help the unhoused in areas with the highest need.

The new funding would pay for wraparound services — such as case management, medical and mental health care, and substance use disorder services — for eligible occupants of the 10,200 permanent housing units and 3,100 interim housing beds the city has promised to build as part of its own separate settlement with LA Alliance, said Skip Miller, outside counsel for the county in the lawsuit.

The proposed settlement, which is still subject to court approval, "is a historic step forward that will now allow everyone to concentrate all their efforts on helping thousands of residents break the vicious cycle of homelessness," Miller said.

The agreement would subject the county to federal court oversight and monitoring under U.S. District Judge David O. Carter for five years.

"In reality, no unhoused person benefits until we all coordinate and work together," said Board of Supervisors Chair Holly J. Mitchell. "Seeing people living on the streets, in their cars, in recreational vehicles, on couches is unacceptable (and) I would argue, immoral."

Mitchell said the agreement "will strengthen our existing collaborations by including more of what is needed: interim and permanent housing options and supportive services that keep people off the streets. This means more dedicated outreach teams with skilled professionals to serve unhoused residents facing complex behavioral health and substance abuse challenges and the resources to equitably prioritize Angelenos with the greatest need for housing."

In June, Carter gave final approval to the city's settlement with the L.A. Alliance in which the city will spend up to $3 billion to develop as many as 16,000 beds or housing units for non-mentally ill members of the homeless population.

The pact is "fair, reasonable, and adequate," the judge wrote at the time. "The agreement before the court was not achieved in haste — it was the result of long and deliberate good-faith negotiations."

Speaking at a news conference Monday at the Residences on Main, a 49-unit affordable housing development, LA Mayor Eric Garcetti said the county agreement represented "the culmination of years of work and decades of failure."

"Now is the time to really put all of our forces together," he said. "It only works with the county, city and community together."

In its March 2020 lawsuit, LA Alliance accused the city and county of failing to do its part in addressing the homelessness crisis. The city's settlement with the coalition was announced in April, but the county refused to participate, saying the city was seeking to force the county to pay for treating thousands of mentally ill homeless people on Skid Row, which is located within the city.

City officials said at the time that the county must be responsible for providing services for homeless individuals with serious mental illness, substance-use issues or chronic physical illnesses because the county has long-established departments to deal with those issues.

On Monday, Miller called the tentative agreement "a major breakthrough" in which the county has negotiated agreements with the city and L.A. Alliance "to end the long-running Skid Row lawsuit and dedicate an unprecedented level of county resources to the fight against homelessness."

According to results of the newly released homeless count, the Los Angeles Homeless Services Authority found that the county's homeless population grew by 4.1% from 66,436 in 2020 to 69,144 in 2022. The percentage of those individuals living indoors in shelters increased from 28% to 30%.

The city of Los Angeles saw its homeless population grow by 1.7% from 41,290 to 41,980 for the same time period, according to the survey.
Los Angeles News Desk Southern California