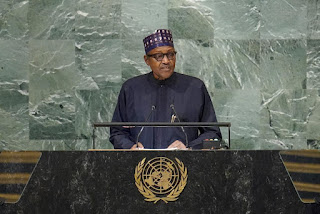 ABUJA, NIGERIA (AP) — Nigeria’s president said Wednesday that the 18 candidates vying to become his successor will run in a “free and fair” election next year.

Nigerian President Muhammadu Buhari told the U.N. General Assembly that his goal before leaving office is to entrench “a process of free, fair and transparent and credible elections through which Nigerians elect leaders of their choice.”

“Ours is a vast country strengthened by its diversity and its common values of hard work, enduring faith and a sense of community. We have invested heavily to strengthen our framework for free and fair elections,” Buhari said.

Only one woman is among the 18 presidential candidates listed by Nigeria’s Independent National Electoral Commission, or INEC, on Tuesday. Nigeria’s political world remains male-dominated, and women rarely make it into top positions.

Analysts had predicted the February 2023 election would be a two-man race between Bola Tinubu, 70, a former governor of Lagos from Buhari’s All Progressives Congress, and former Vice President Atiku Abubakar, 75, who placed second in the 2019 presidential election.

However, the growing popularity of Peter Obi, a former governor of southeast Nigeria’s Anambra state, has put him ahead of the other candidates, according to a recent poll.

The electoral commission projected that 95 million voters would participate in the February election. Security and economic crises have caused hardship for many of the more than 200 million citizens of Africa’s most populous country.

Despite being one of the continent’s top oil producers, Nigeria is grappling with a 33% unemployment rate and a 40% poverty rate, according to the latest government statistics. The country has also battled an insurgency by Islamic extremist rebels in the northeast, as well as armed violence now spreading across parts of the northwest and southeast regions.