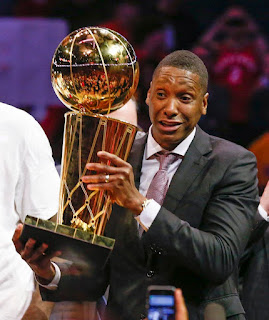 TORONTO, CANADA (TORONTO STAR) -- Toronto Raptors president Masai Ujiri became a little emotional while recounting an incident from his childhood, in which his mother questioned the overuse of his shoes and wondered whether sports was ever going to feed him.

lot of people now,” said Ujiri on Monday while addressing the audience at the United Nations’ Unstoppable Africa Conference.

Ujiri was leading the discussions about moving sports forward. He and Raptors star Pascal Siakam were among high-profile panellists who reiterated a commitment to grow the game of basketball and sports in general on the African continent.

“Sports is here to stay and we are the definition of unstoppable,” said Ujiri. “We should no longer see sports as a recreation alone. Sports is a business. It creates incredible opportunity for all of us.”

Giants of Africa, which Ujiri co-founded in 2003, has for years helped several high-level basketball talents from Africa to reach the NBA. Now the program wants to ensure sports can benefit Africa as a whole through job creation, youth and women empowerment and a pathway to sustainable peace and prosperity.

Ujiri was instrumental in the creation and launch of Basketball Africa League, which held its inaugural tournament in 2021 in Kigali, Rwanda. The league consists of 12 teams representing their respective countries, competing in two conferences with the four best teams in each conference qualifying for the post-season.

Across the continent, Ujiri and Giants of Africa have been working to increase access to the game of basketball, building courts in different countries and holding summer camps to encourage young people to get into organized sports.

Ujiri takes pride in acknowledging the fact that NBA stars like Siakam, Joel Embiid and Giannis Antetokounmpo have African heritage. He has no doubt the continent can produce even more such big names and showcase them on the global stage.

“I can tell you this: there’s a thousand of each one of them walking around the continent,” he told the audience.

BAL president Amadou Fall said his league is taking all the steps necessary to bring the fundamentals of the game to the youth of Africa on a larger scale. As the tournament grows both in size and popularity, so will financial opportunities associated with it.

“Africa needs to cease being an exporter of talent,” he said. “We want to create an entertainment platform right here on the continent.”

Few people know about the importance of growing the sport of basketball on African continent more than Siakam, who came to the NBA after participating in the Basketball Without Borders camps that were hosted by former NBA player Luc Mbah a Moute.

The Raptors power forward has started hosting his own summer camps through his PS43 Foundation, with the goal of introducing basketball skills to kids while they are still young.

“I started playing basketball when I was like 17, which is super crazy,” Siakam told the audience Monday. As “a scrawny kid from Cameroon” it was motivating for him to see other Africans succeeding in the NBA, and now he wants to pay it forward.

“I hope I’m part of these people who inspire other young Africans to dream big,” he said, noting he wants to contribute in building schools and community centres for kids in Africa. “Education is the most important thing. My dad believed in it and so do I.”

NBA Commissioner Adam Silver said the work being done by Giants of Africa goes beyond building infrastructure and discovering high-level talents to join professional sports. He praised the program for teaching kids moral values, life skills and how to be productive in society.

“I would include myself as one of those people,” he said, noting he never had a chance to play professionally but playing sports taught him how to be disciplined and work hard.

He said the NBA is now at a level where about 10 per cent of current players were born in Africa, which gives other children from Africa something to aspire to.

Speaking at a panel that included Patrice Motsepe, president of the Confederation of African Football, Silver said both sports can coexist and advance the industry collectively.

“We’re not Coke and Pepsi,” he said. “Whether you shoot it or kick it, we can work hand in hand.”