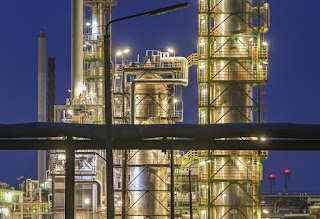 FILE - The facilities of the oil refinery on the industrial site of PCK-Raffinerie GmbH, jointly owned by Rosneft, are illuminated in the evening in Schwedt, Germany, on May 4, 2022. The German government says it is taking control of Russian oil giant Rosneft’s subsidiary in Germany, citing the need to ensure continued operations at three oil refineries in the country. The Economy Ministry said in a statement Friday, Sept. 16, that Rosneft Deutschland GmbH and RN Refining & Marketing GmbH will be put under the control of Germany’s Federal Network Agency. (Patrick Pleul/dpa via AP, File)
BY FRANK JORDANS

BERLIN (AP) — Germany is taking control of three Russian-owned refineries in the country to ensure energy security before an embargo on oil from Russia takes effect next year, officials said Friday.

Two subsidiaries of Russian oil giant Rosneft — Rosneft Deutschland GmbH and RN Refining & Marketing GmbH — will be put under the administration of Germany’s Federal Network Agency, the Economy Ministry said in a statement.

As a result, the agency will also control the companies’ shares in the refineries PCK Schwedt, MiRo and Bayernoil, located in the east and south of Germany.

“With today’s decision, we’re ensuring that Germany is supplied with oil in the medium- and long-term as well,” Scholz said. “That is particularly true for the Schwedt refinery.”

The facility provides petroleum products to much of northeastern Germany, including Berlin.

It said the move would help ensure continued energy supplies and was initially due to last for six months.

Rosneft had previously made clear it had no intention to stop imports of oil via the Druzhba pipeline, which runs from Russia through Ukraine to refineries in central Europe, despite a looming EU embargo coming into force on Jan 1, 2023.

Scholz said a 1-billion-euro (dollar) aid package would secure jobs for about 1,200 people currently working at the PCK refinery in Schwedt and help with its long-term transformation as part of the transition toward a green economy.

Economy Minister Robert Habeck said the refinery would in the future receive oil through a pipeline from the port city of Rostock and via neighboring Poland, which had refused to provide supplies as long as there was a risk that Rosneft might profit from them.
Associated Press Germany News Desk Russia