EXPLAINER: Bused, Flown Migrants Can Live In U.S. — For Now 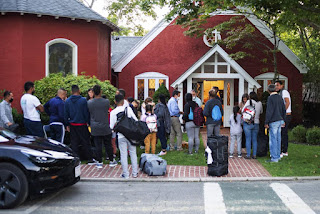 Immigrants gather with their belongings outside St. Andrews Episcopal Church, Wednesday Sept. 14, 2022, in Edgartown, Mass., on Martha's Vineyard. Florida Gov. Ron DeSantis on Wednesday flew two planes of immigrants to Martha's Vineyard, escalating a tactic by Republican governors to draw attention to what they consider to be the Biden administration's failed border policies. (Ray Ewing/Vineyard Gazette via AP)
BY ELLIOT SPAGAT, ASSOCIATED PRESS

Republican governors have been sending more migrants from the U.S. border with Mexico to Democratic strongholds, raising questions about how the newcomers are lured onto buses and planes, their legal status and the cost to taxpayers.

U.S. authorities are grappling with unusually large numbers of migrants crossing the border from Mexico. The administration said Monday that people from Venezuela, Cuba and Nicaragua accounted for more than 1 in 3 migrants stopped at the border in August.

Are the migrants in the U.S. legally?

Yes, temporarily. Tens of thousands who cross the border illegally from Mexico are released in the United States each month with notices to appear in immigration court to pursue asylum or humanitarian parole and requirements to report regularly to immigration authorities. Migrants may seek asylum if they enter the country illegally under U.S. and international law, and U.S. authorities have broad authority to grant parole based on individual circumstances.

Migrants must keep a current address with authorities, who schedule appointments in the nearest city with a court or immigration office. Migrants must apply separately for permission to work.

It has been taking nearly four years on average for asylum cases to be decided in immigration court, according to the Biden administration, leaving migrants in a legal purgatory that shields them from deportation. The backlog in immigration courts has mushroomed to more than 1.9 million cases, according to Syracuse University’s Transactional Records Access Clearinghouse.

To avoid overcrowding in detention facilities, the administration began releasing migrants on humanitarian parole. The Border Patrol paroled nearly 250,000 migrants from August 2021 through June, including 40,151 in June, the latest figures released. In the previous seven months, it paroled only 11 migrants.

Were the relocated migrants kidnapped?

Kidnapping is a high legal threshold, but migrants flown to Martha’s Vineyard say they were taken there on false pretenses. Migrants sign waivers that the transportation is free and voluntary.

DeSantis used a state program in which migrants who are deemed “unauthorized aliens” can be moved “from Florida.” However, the governor has acknowledged that the flights originated in Texas and stopped in Florida before going to Martha’s Vineyard. DeSantis has not emphasized that; instead, he maintains that the flights were a legitimate use of funds because the migrants otherwise would have aimed to go to Florida, though he offered no evidence.

Migrants who boarded the flights told the Associated Press that a woman who approached them at a San Antonio shelter promised jobs and three months of housing in Washington, New York, Philadelphia and Boston.

Doesn’t the Biden administration bus and fly migrants around the country?

Yes, but under different circumstances. Like earlier administrations, it transports migrants between detention facilities, often on their way to being removed from the United States.

U.S. Immigration and Customs Enforcement made more than 4,800 domestic flights in the last year, including 434 in August, according to Witness at the Border. The top five destinations from March to August were Alexandria, La.; Phoenix; and Laredo, Harlingen and El Paso, Texas. ICE also buses many migrants.

The Department of Health and Human Services transports unaccompanied children to “sponsors,” who are often family, or to child-only detention facilities.

Did the cities ask to accept the migrants?

Republican-led states say they are sending migrants to “sanctuary” cities that welcome immigrants. While the definition of a sanctuary city is slippery, a sudden influx of migrants can test attitudes and limits of generosity.

The six towns that make up Martha’s Vineyard haven’t issued “sanctuary” declarations. The Center for Immigration Studies, which advocates for restrictions, keeps a list of sanctuary jurisdictions, which, by its definition, limit cooperation with federal immigration authorities. The list includes Boston and seven other Massachusetts cities; none of the towns in Martha’s Vineyard are on it.

How much is being spent to move migrants?

Texas has committed billions of dollars to Abbott’s “Operation Lone Star,” an unprecedented move into border security that includes the bus trips, prosecutions of border crossers for trespassing and a massive presence of state troopers and the National Guard.

The Florida Legislature allocated $12 million for its program for the current budget year.

El Paso, which last week contracted a private bus company at a cost of up to $2 million, plans to seek reimbursement from the federal government.