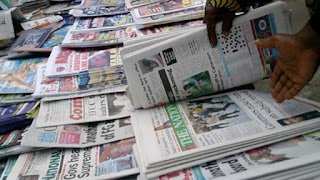 ABUJA, NIGERIA (VOA) -- Nigeria’s broadcasting regulator on Friday announced it will revoke the licenses of 52 media organizations over unpaid fees, in a move the country’s journalist union says is “ill advised.”

In a press release, the NBC said it published a list of media companies owing license fees in May and gave the organizations a grace period to pay the debt and avoid having licenses revoked.

Those who had still not paid were ordered to shut down operations in the next 24 hours.

Included on the list are about 20 state government media outlets, including some belonging to the ruling All Progressives Congress, or APC party.

Nigeria’s Union of Journalists described the move as “hasty” and “ill advised.”

In a statement, the union president, Chris Isiguzo said the broadcasting commission had failed to take account of the economic reality in Nigeria and noted that some unpaid fees dated back to 2015.

Isiguzo said that the union “regret[s] the inability” of broadcasters to pay their fees and cited “dwindling resources.”

But, he said, “We caution against such large-scale clampdown of broadcast stations in disregard to security issues and the attendant consequence. We cannot afford the unpleasant outcome of such media blackout at this time.

The heads of some of the affected stations requested more time to pay their dues, citing a tough economic climate.

The head of Jos-based Unity Radio and Television Stations, Ibrahim Dasuki Nakande, said that although the broadcasting commission has financial reasons for taking such measures, he believes the action is too punitive during an economic downturn.

Shu’aibu Kere Ahmed, director of Zuma FM Radio, said the station was aware of the impending revocation and pleaded with the commission for more time, noting the high costs involved in running a media organization.

The broadcasting commission announcement comes a few weeks after the regulator fined four Nigerian stations in connection with their coverage of insecurity.

The commission fined Trust TV $11,726 (5 million naira) over a documentary on terrorism, which it said was provocative and contained misinformation.

The other outlets were fined the same amount after they aired a BBC documentary, Bandit Warlords of Zamfara.

In a press release shared on social media, the commission said the documentary “glorified” banditry and “undermines national security.”

The commission director, Illelah, on Friday said the demand that media organizations pay their debts is neither retaliatory nor political.

Nigeria ranks 129 out of 180 countries and regions on the World Press Freedom Index, where 1 has the best media conditions.

Reporters Without Borders, which compiles the list, notes that the country has a large number of media outlets but “very few are in good economic health.”