For The First Time In Almost 50 Years: Change Of Power In Angola Possible 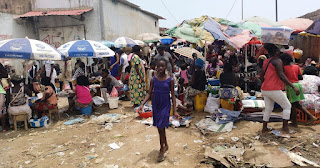 A young girl walks through the Buracos market, in the Angolan restive region of Cabinda, on April 9, 2019 in Cabinda, Angola. Image: Daniel Garelo Pensador

JOHANNESBURG, SOUTH AFRICA (GLOBE ECHO) -- For the first time since Angola gained independence in 1975, the opposition could win the elections. The ruling MPLA party and its opponents from Unita are in a neck-and-neck race. Angola’s young voters are likely to make the difference.

For the first time since the end of the civil war in Angola, things are getting tight for the “Movimento Popular de Libertação de Angola” (MPLA), the “People’s Movement for the Liberation of Angola”. She has ruled the country for almost 50 years. Her greatest adversary, the “União Nacional para a Independência Total de Angola” (Unita), in English “National Union for the Complete Independence of Angola”, has not stood a chance in all previous elections. MPLA and Unita – it sounds like the war of independence against Portugal is still ongoing; strange names for two parties in a country that has been independent since 1975. But Angola is also a country where civil war raged until 2002. A country that for many years was – and for the most part still is – a symbol of corruption and nepotism.

The party with the most votes automatically appoints the president in Angola; he is not directly elected. As of 2017, that is the MPLA’s João Lourenço, a 68-year-old ex-general who was the country’s defense minister from 2014 to 2017. Before him, José Eduardo dos Santos had ruled Angola since 1979 and was considered one of the greatest kleptocrats on the African continent. He died in July. The Unita candidates have never had a chance against dos Santos since 2008 – the first re-election since the end of the civil war.

Now, however, Unita has entered into an alliance with other opposition parties, which, however, was not recognized as a list by the electoral commission. The Unita candidate’s name is Adalberto Costa Junior, or “ACJ” for short: 60 years old, charismatic, a good speaker who is well received by Angola’s youth. That counts for a lot in a country where 60 percent of the population is under the age of 24. In polls, he is just ahead of the incumbent, the two parties are level.

Angola is actually a rich country, the third largest economy in sub-Saharan Africa. According to figures from the Organization of the Petroleum Exporting Countries (OPEC), Angola has been the largest oil producer in sub-Saharan Africa since May – a title for which the country is competing with Nigeria. There are large diamond deposits, economic growth has been the highest on the continent for three years. At the same time, Angola’s people are destitute, about half of the population lives below the poverty line, especially in rural areas. The reason: corruption and nepotism.

Former President dos Santos and his family are considered a prime example of this. According to research by the Financial Times, between 2007 and 2010 alone, more than 32 billion US dollars disappeared from the national budget. His daughter Isabel’s assets were partially frozen two years ago, also because of allegations of corruption. Since João Lourenço took office in 2017, the dos Santos family was suddenly no longer unassailable.
Sluggish fight against corruption

Despite this spectacular success, the current president is making little progress in fighting corruption. Although Lourenço points to the more than 700 criminal cases that are pending, this is not enough for large sections of civil society. According to Transparency International, Angola is still among the 50 most corrupt countries in the world, although the organization notes that Angola has moved up 31 spots since 2017.

Progress is also sluggish in the fight against poverty. The “miracle” promised by Lourenço did not happen, which may also have been due to the Covid pandemic. He had promised 500,000 new jobs, he wanted to broaden the economy – no longer just rely on oil and diamonds. So far he has failed. Inflation is 25 percent and unemployment is 30 percent. The country’s infrastructure has still not been restored 20 years after the end of the civil war. Close economic ties with China have not brought any relief to Angola either: the numerous roads financed by Beijing have to be completely renovated every two years, and numerous residential buildings built by Chinese are in danger of collapsing.

Now it looks as if the young Angolans will play the decisive role in the election. Their values ​​and beliefs differ dramatically from those in power, they say. Around 14 million Angolans are called to vote. But what if the opposition actually manages to change power, but the result is then suppressed? The country’s security apparatus is still considered to be as repressive as it was under dos Santos. Even before election day, Amnesty International denounced human rights violations: Activists were repeatedly shot while they were demonstrating peacefully. The first results are expected on Friday.
READ ORIGINAL ARTICLE HERE
Africa Angola Electoral Mess Oil