on June 14, 2022
BY JENNIFER McDERMOTT AND GEOFF MULVIHILL 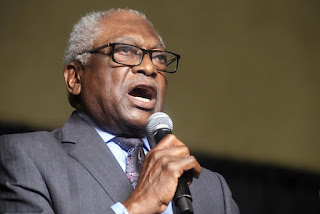 
WASHINGTON (AP) - The U.S. failed to take basic steps at the start of the coronavirus pandemic to prevent fraud in a federal aid program intended to help small businesses, depleting the funds and making people more vulnerable to identity theft, the chairman of a House panel examining the payouts said Tuesday.

Democratic Rep. James Clyburn blamed the Trump administration for the problems in the COVID-19 Economic Injury Disaster Loan program, overseen by the U.S. Small Business Administration, amid revelations that as much as 20% of the money — tens of billions of dollars — may have been awarded to fraudsters.

Clyburn said the Biden administration has implemented measures to identify potential fraud and directed loan officers to address indications of fraud before approving loans, while Congress has invested in fraud prevention and accountability.

Rep. Steve Scalise, the No. 2 House Republican, said the Trump administration and Congress worked together at the beginning of the pandemic, when uncertainty was rampant and much of the economy was locked down, to deliver “much needed relief as fast as we could to help save as many jobs as we could” and prevent the economy from crashing.

Scalise, R-La., said Democrats are undermining the successes, and he asked why the House coronavirus panel Clyburn chairs wasn’t looking into the enhanced unemployment insurance program that was plagued by “egregious and unprecedented fraud” and is a “leading contributor” to the high inflation rates.

“I hope that in our oversight of pandemic programs, my Democratic colleagues will be able to recognize the difference between what was needed to save the economy during an unprecedented pandemic versus pushing a partisan, inflation-inducing agenda,” he said.

Clyburn, of South Carolina, said the subcommittee will determine what more must be done to bring perpetrators of fraud to justice and how to protect future emergency programs.

Clyburn said he supports extending the statute of limitations for this kind of fraud case to give investigators more time to untangle complex potential crimes. Witnesses at the hearing suggested standardizing the data collected by states to make it easier for federal authorities to spot possibly fraudulent patterns.

The SBA’s Office of the Inspector General has estimated that at least $80 billion distributed from the $400 billion EIDL program could have been fraudulent, much of it in scams using stolen identities. Separately, staff for the select subcommittee on Tuesday issued a report that found that some 1.6 million applications for the loans may have been approved without being evaluated.

The subcommittee’s staff found that those loans were approved in batches of up to 500 applications at a time. Applications were allowed to move through even if they had certain red flags for fraud — such as international client locations or phone numbers not associated with the business or the owner — so long as they weren’t too many of them. The process meant that while software analyzed the applications, they were not even opened by officials before being greenlighted for funding.

The SBA’s inspector general, Hannibal “Mike” Ware, said initially there was a huge struggle at the agency about the “need for speed versus the need for controls.” He said he was “screaming” about the need for fraud controls. He said the most concerning thing was self-certification, which meant applicants could say they had a business or a certain number of employees and get money.

The subcommittee hearing also tackled broader fraud concerns with the flood of pandemic aid from multiple federal government programs for states, local governments, businesses and the unemployed. The $5 trillion in total aid, delivered in a series of bills signed by Presidents Donald Trump and Joe Biden, have come with numerous complications.

Fraud overwhelmed enhanced unemployment insurance programs funded by the federal government and administered by the states. There was so much aid to governments that many struggled to find a way to spend it all under the original regulations. And there have been questions about whether the Paycheck Protection Program to keep employees working was worth it.

The Secret Service said in December that nearly $100 billion has been stolen from COVID-19 relief programs, basing that estimate on its cases and data from the Labor Department and the Small Business Administration. The White House downplayed the estimate, saying it was based on old reports.

The Federal Emergency Management Agency may have been double-billed for the funerals of hundreds of people who died of COVID-19, the Government Accountability Office said in April. States and cities continue to be slow to spend their pandemic relief money.

The select subcommittee said Tuesday that more than $10 billion allocated under two massive business loan programs has been returned because of investigations and bank actions. Federal prosecutors have charged nearly 1,500 people with crimes related to fraud against the government over the business loans and enhanced unemployment insurance programs.

The government’s Pandemic Response Accountability Committee says inspectors general for various federal agencies have at least 1,150 ongoing investigations into fraud from the different aid funds. Officials say it could take years to untangle all the problems.

This story corrects that Rep. Steve Scalise is the Republican whip, the No. 2 House Republican, not majority whip.
Associated Press COVID-19 News Desk