The Draughtswoman Making Her Point In Art

on May 03, 2022
BY PEACE HYDE
Art can have many expressions. Jacqueline Suowari’s is as a draughtswoman, with larger- than-life drawings using a ballpoint pen. 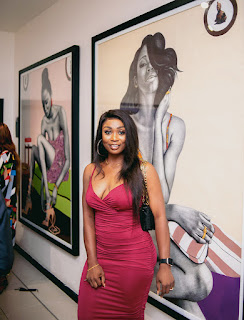 FOR AS LONG AS JACQUELINE SUOWARI CAN remember, she had wanted to become an artist. Born in Zaria in Kaduna State, Nigeria, Suowari developed a passion for art the moment she chanced upon a sculpture made by local artists in her neighborhood. Her only problem was convincing everybody else that this was what she was born to do. This was when she was only nine.

“I said I wanted to be an artist, and literally had to fight that battle with everyone. I was being ignored by everyone because they thought I was a child and they wouldn’t take me seriously. Even when I didn’t know what it entailed or what it meant, I stuck to it,” says Suowari.


As she was leaving secondary school for university, her teachers too tried to convince her otherwise.

“But I had to stand my ground and say that being an artist is the thing I want to do even in the face of the impending doom they painted. I knew I wouldn’t be happy doing anything else.”


As the years passed, she eventually became a painter, but that too led her to reinventing herself.

“I went to school as a painter, I trained as a painter. I was second-best graduating student in my department as a painter, and then I finished and then three years down the line, I realized I was not happy. Yes, I went to school, I studied fine art, I am a painter but I am not happy. After some serious introspection, I found out that it was drawing that made me happy. It wasn’t the painting. And I wasn’t drawing anymore because I was now a painter.”


She read a profile on Toyin Odutola, a Nigerian-American contemporary visual artist known for her vivid drawings on work and paper, and that brought Suowari back to her childhood calling.

“She draws with a ball point pen and I saw on her bio on Twitter the word ‘draughtswoman’ and that was the first time I saw that. I checked it in the dictionary and at thetimetherewasn’t any word like that,” says Suowari.


That was the light bulb moment she needed.

It took Suowari a while to find her style but


once she did, things began to slowly materialize.
“At the time, nobody was buying my drawings. Imagine what it’s

like to build four years as a painter and then stop and start again as a draughtswoman. It was crazy but I wanted to draw so I kept on doing work, getting better and building on my skills. I found out my passion was to do bigger work, not just small ones. I wanted to go bigger and bigger to a point where I couldn’t find paper to draw on in Nigeria.”


She started importing paper that could take the size of the drawings she wanted to create. This was her new-found love for drawing with a ballpoint pen.

Alongside, Suowari also offered children art lessons to pay the bills until she got her first big break.


“People were saying nobody has houses with this kind of space and nobody will buy [the drawings]. But I thought to myself, my market is not just restricted to Nigeria. Yes, I’m a Nigerian in Nigeria but I’m making art for the world and the owners of these paintings will find me. When you are passionate about something, you don’t put the money in front, you put the passion in front,” says Suowari.

And she was right. Suowari was signed up between 2014 and 2017 by the Avant Gallery in New York. Today, she is a name in contemporary art exhibitions in Nigeria and overseas; selling from between $10,000 to $40,000 depending on the size of each work.


Her larger-than-life pieces are overlaid with beautiful colors and are in demand but for Suowari, nothing is better than the joy of picking up a ballpoint pen; it’s the same joy she discovered as a wide- eyed nine year old.
SOURCE: FORBES AFRICA
Artists Essay Forbes Nigeria