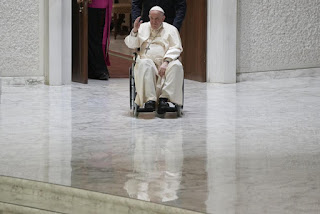 Pope Francis arrives in the Paul VI hall to meet with Italian members of the Cursillos de Cristianidad movement at the Vatican, Saturday, 28, 2002. (AP Photo/Gregorio Borgia)

VATICAN CITY (AP) — Pope Francis, the archbishop of Canterbury and the leader of a the church of Scotland will together lead a prayer vigil for peace while visiting South Sudan next month, the Vatican said Saturday.

It released details of the pontiff’s itinerary of his July 2-7 African travels, which he will begin in Congo. Then he travels to South Sudan, where he will make what is being billed as an historic “ecumenical pilgrimage of peace” along with the Rev. Justin Welby, who heads the Anglican church, and the Right Rev. Iain Greenshields, moderator of the General Assembly of the Church of Scotland.

The visit seeks to boost a 2018 agreement aimed at ending civil war in South Sudan.

The African trip will be the first overseas voyage for the pontiff since he has taken to using a wheelchair on occasion in public lately as he struggles with a knee ligament problem.

Francis, 85, battled a major medical issue last summer, when he underwent intestinal surgery in July necessitated by what the Vatican said was a severe narrowing of the colon.

While warring parties signed the peace agreement after 20 months of violent conflict, South Sudan is facing heavy challenges, including an economy risking collapse, a deteriorating humanitarian situation and “an unsteady political will to implement the peace agreement,″ the Church of Scotland said.

“I am genuinely humbled at the opportunity to assist our brothers and sisters in South Sudan in the search for peace, reconciliation and justice,″ Greenshields said in the statement. He said Francis, Welby and himself are coming ”as servants of the Global Church.”

On the first full day of their pilgrimage in South Sudan, the three men will visit a camp in Juba for internally displaced people.

Francis will also meet with victims of violence in Beni and in the east of Congo, the Vatican said. Last year, two explosions on the same day hit a Catholic church and a market in Beni. The explosions were claimed by the Islamic State group’s Central Africa Province.
Africa AP News Desk Religion