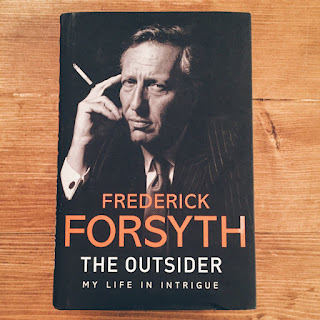 BY WILLIAM URBAN
Frederick Forsyth, one of the greatest spy novelists of recent decades, did not start out to become a writer. As occasionally happens in life, he made his choice because he had no better options. This was a major change from his past, when he had benefitted from good luck, his ability to make friends quickly, and unlimited gall. He knew when to promote himself and when to pass himself off as a complete idiot. Both techniques worked when appropriate.

He was also very stubborn, with a strong sense of right and wrong. This first appeared when he was sent to “public school,” which is what the British call exclusive private boarding schools—after being beaten repeatedly for disobedience, he was left with a lifelong mistrust of educators, bureaucrats, and politicians.

His father, who was in the military and unable to provide much guidance at home, sent him to France to live with a family which spoke no English. Soon he could rattle along in fluent but ungrammatical French. Not long afterward his father was transferred to Berlin. There Forsyth repeated his French experience.

He learned much about languages. Most importantly, that speaking a language is less about grammar than about pronunciation, tempo, idioms, and watching the reactions of the people you are talking with. Thus, when his father sent him to the university in Granada (Spain) to study the language properly, he skipped classes, found a middle-aged mistress who was probably a Nazi exile, hung around the docks, tried to become a bull-fighter, and picked up a lot of information about politics. Ben Franklin would have approved—that was how he learned French, but Franklin’s Italian came from being a chess player, because the winner could assign his opponent to memorize grammatical rules. In short, in learning languages, do what works best for you.

He learned to fly quite young, having been inspired during the war by having been playfully put in the seat of a Spitfire; then, rather than attend the university, he enlisted in the RAF. The post-war budget cuts meant that even the slightest demerit resulted in dismissal, but he graduated as the youngest pilot to date. The next step was much harder, since the few slots for combat aircraft were awarded on the who-knows-whom system. He settled for heavy transports, but found that rather boring.

Completely at a loss as for what to do, he used his own connections to be hired at a regional newspaper. This was also a bit dull, but the experience led to being hired at BBC. Then his language knowledge kicked in: “Who knows some French?” This put him in Paris at the time that mutinous officers attempted to assassinate de Gaulle. That eventually led to “The Day of the Jackal.” When there was a crisis in Berlin, he was sent to cover it. The adventures there can best be imagined by those of us who have actually been in East Berlin and East Germany. (Ask my wife about smiling at border guards at midnight.) Bottom line: What was he thinking? More than once he escaped trouble by imitating P.G. Woodhouse’s Bertie—feigning absolute stupidity and speaking a stumbling, incomprehensible version of German that only an upper-class English twit could have thought of.

Out of that experience came the later novel about the “rat line” that got Nazis out to South America, “A Small Town in Germany.” I remember saying to myself when I first read it, “This guy knows his stuff.”

He was returned to London only to be sent off to Nigeria to observe the uprising in Biafra. The orders were strict: do not under any circumstance file a report! That was rather strange. Isn’t that why reporters were sent abroad? After weeks he learned that the higher-ups in the Foreign Office had decided that the future in Nigeria lay with the Muslims in the north—they had a military tradition, while the Christians in the south were interested only in business, education, and medicine. Consequently, the uprising’s success was an embarrassment, and the BBC did not want to anger the Foreign Office. When he was told to forget about the story, Forsyth made his way back to Biafra and was horrified by seeing a million children starving to death. For reporting that, he was soon out of a job. That’s where, by pure luck, he was advised to write books based on his experiences. His third novel was “The Dogs of War,” so carefully researched on how a handful of mercenaries could overthrow an African government that it became essential reading in that post-colonial market.

The story slows down there. Marriage, children, more books, a second marriage, success and fame, and some bewilderment as to how it all happened.