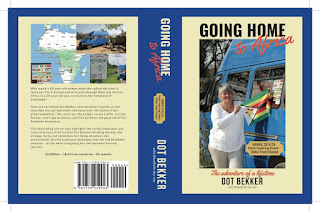 When you take the courageous decision to drive thousands of kilometres from Europe and then through Africa, there is much adventure to be expected.

And while most travellers often set their sights on understanding the laws, culture and a good enough grip of the languages spoken in the countries they are travelling to, sometimes the biggest nightmare is sandy, muddied and potholed roads that are nearly impossible to prepare for.

Other times, the best thing to pack is the courage to put up a stubborn argument with border security when trouble looms.

These are just some lessons learnt by Zimbabwe-born author Dot Bekker, who bravely walked out of an unhappy marriage of 22 years, bought a van and travelled from Europe back to the land of her birth.


Bekker narrates her journey in her self-published book, Going Home To Africa.

Among other reasons, Bekker hopes the book answers a question she was commonly asked by those who had heard of her eventful journey — how she managed to drive herself through West Africa.

During her book signing at Fogarty’s book shop in Walmer on Friday, Bekker said the simplest and best answer to the question was that “Africa is full of warmth and good people”.

Born and raised in Bulawayo, Bekker relocated to SA in her early 20s and later to several European countries.

“It’s been a grand adventure altogether but what I did discover after 21 years in Europe was that I didn’t belong there.

“I may be Caucasian but I was certainly not European. Europe is a really hard place to live in,” Bekker said.

“I was unhappily married for 22 years and it just kept getting worse.

Bekker bought herself a 1994 Ford Transit which she not only travelled in but also lived in and continues to live in today.

She named the vehicle Blue-Bell.

Over 8½ months, the author travelled 20,000km through 18 West African countries to get home.

Her eventful tour included celebrating her 60th birthday in Morocco, where she was stuck in the sand for the first time in her journey, and again in Mauritania before travelling through other African countries she had never been to.

With humour and wit, Bekker details event in one of her stories in the book.

In the early stages of her journey, Bekker had dealt with several corrupt border officials, had half a tank of petrol poured into her diesel-powered vehicle, burned her leg and needed medical attention.

“People ask me how I managed to get this many stories. Trust me, every day there was a story,” she said.

Along with its lowlights, the journey had equally memorable highlights.

“I spent some time in Gambia and, one of my highlights, there was an old wooden dugout in the mangroves just off the side of the Gambia River …

“It was incredibly beautiful; the birdlife and the beautiful still water was sublime,” she said.

“Before I got to Ivory Coas,t I decided to go and see chimpanzees in the wild, which was another huge highlight for me,” she said.

The author said she also enjoyed a wonderful stay in Angola though she, at one point, found herself staging a solo protest against a truck driver on a one-lane bridge at the border.

Bekker arrived in Zimbabwe in August 2019 and her present focus is on giving high school girls access to education.

“Before I left Europe, I started a foundation called Kusasa Africa because I believed that our girls are our tomorrow, throughout the whole of Africa.

“My focus is getting girls into high school and I’m working with some people to impart life skills,” she said.