US Approves $1B Arms Sale To Nigeria Despite Rights Concerns 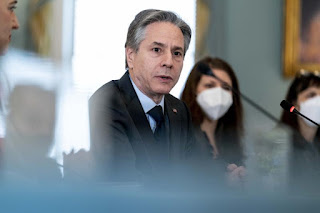 WASHINGTON (AP) — The Biden administration has given the green light for Nigeria to buy advanced attack helicopters worth nearly $1 billion despite concerns about the country’s human rights record as it battles threats from criminal gangs and extremists in the north.

The State Department on Thursday announced the approval of the $997 million sale of 24 Bell AH-1Z Viper helicopters and related equipment to Nigeria. The related equipment includes guidance, night vision and targeting systems as well as engines and training support, the department said in a notice to Congress.

The sale went ahead after a November visit to Abuja by Secretary of State Antony Blinken during which he raised concerns about Nigeria’s rights record. At the time, though, Blinken also made clear that the United States regards Nigeria as a partner in combating terrorism and Islamic extremism in West Africa and the Sahel, a region along the Sahara Desert stretching across North Africa, and is looking to increase cooperation with it in those areas.

“This proposed sale will support the foreign policy goals and national security objectives of the United States by improving the security of a strategic partner in Sub-Saharan Africa,” the department told Congress.

The deal will also “better equip Nigeria to contribute to shared security objectives, promote regional stability and build interoperability with the U.S. and other Western partners” and “will be a major contribution to U.S. and Nigerian security goals,” the notice said.

Nigeria’s security forces have long been accused of human rights violations in their operations, with personnel involved often escaping justice.

In October 2020, the army opened fire at a demonstration in the country’s economic hub where hundreds were protesting against police brutality, killing 11 people and injuring many others, according to a government-backed panel.

During Blinken’s visit on November, he said the U.S. was looking forward to seeing the full results of the investigation and would make a decision on arms sales to Nigeria based in part on the findings and whether those responsible were held accountable.

Nigeria is also facing a growing threat from armed gangs and extremist rebels who are now working together in the country’s troubled northwest and threaten to further destabilize an already volatile region.

Nigeria, Africa’s most populous country with 206 million people, has been battling violence in the north and an alliance between the two groups could worsen the crisis, analysts believe.
Associated Press News Desk Nigeria United States