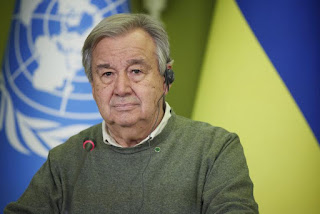 In this image provided by the Ukrainian Presidential Press Office, U.N. Secretary-General Antonio Guterres attend a joint news conference with Ukrainian President Volodymyr Zelenskyy in Kyiv, Ukraine, Thursday, April 28, 2022. (Ukrainian Presidential Press Office via AP)
UNITED NATIONS (AP) — U.N. Secretary-General Antonio Guterres is heading to West Africa on Saturday to join Muslims marking the end of the holy month of Ramadan and to highlight the impact of the Ukraine war on the African continent, the U.N. announced Friday.

U.N. deputy spokesman Farhan Haq said the secretary-general will arrive in Senegal on Saturday evening, travel to Niger on Monday and to Nigeria on Tuesday and then return to New York.

The U.N. chief will share an Iftar dinner -- the meal breaking the Ramadan fast -- with President Macky Sall of Senegal, who assumed the presidency of the African Union earlier this year, Haq said.

Guterres will also take part in celebrations of the Eid al-Fitr holiday marking the end of Ramadan with Niger’s President Mohamed Bazoum, Haq said, and he is also scheduled to meet Nigeria’s President Muhammadu Buhari.

In the three countries, the secretary-general also will meet civil society representatives, religious leaders and families affected by violence and instability in Africa’s Sahel region, including people internally displaced and refugees, the U.N. spokesman said.

Guterres will also see first-hand the impact of climate change on vulnerable communities, and will assess progress and challenges to the recovery from the COVID-19 pandemic, Haq said.

The secretary-general issued a report this month saying Russia’s war on Ukraine threatens to devastate the economies of many developing countries in Africa and elsewhere that are now facing even higher food and energy costs and increasingly difficult financial conditions.

Guterres began annual Ramadan solidarity visits in his previous job as the U.N. refugee chief but the tradition was interrupted by the pandemic.