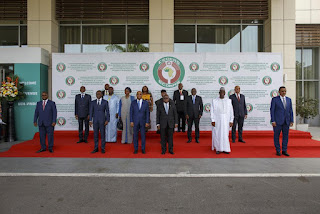 The regional economic bloc known as ECOWAS invited the junta leader and transitional president of Mali, Col. Assimi Goita, to attend in person, but his office said he wouldn’t go in person but may attend virtually.

It’s likely that the bloc will revisit the January sanctions that suspended most commerce and financial aid to the country and included land and air border closures with other countries belonging to ECOWAS.

The African Economic and Monetary Union Court of Justice on Thursday ordered the suspension of those sanctions. Mali’s leaders have been requesting a lifting of the sanctions since they were imposed and last month filed a legal complaint saying they would severely affect Malians.

It is unclear if the regional body meeting in Ghana’s capital, Accra, on Friday will follow the recommendation of the court.

After overthrowing Mali’s democratically elected president in August 2020, coup leader Goita had promised to swiftly return the country to democratic rule. Doubts deepened about his intentions, though, after he effectively launched a second coup nine months later, forcing out the chosen transitional civilian leaders and becoming president himself.

The junta led by Goita, which had initially agreed to hold a new election in February, said in January that new elections would instead by held in 2026, giving Goita four more years in power.
ECOWAS Mali News Desk The Associated Press West Africa