US, EU Raise Alarm Over Alleged Torture By Ugandan Forces 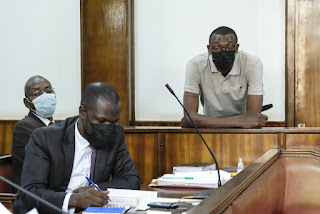 Kakwenza Rukirabashaija, displaying scars on his arm and charging that he was tortured for weeks while in detention, appears before a court in a failed bid to have his passport returned so he could seek medical treatment abroad, at a court in Kampala, Uganda on Tuesday, Feb. 1, 2022. The European Union and the United States are raising alarm over torture allegedly perpetrated by Uganda's security forces, with the prominent writer and government critic saying that he is a recent victim. (AP Photo/Hajarah Nalwadda)
BY RODNEY MUHUMUZA

KAMPALA, UGANDA (AP) — The European Union and the United States are raising alarm over torture allegedly perpetrated by Uganda’s security forces, with a prominent writer and government critic saying that he is a recent victim.

The EU Delegation to Uganda in a statement Monday expressed concern over “a situation that for more than a year has seen a significant increase of reports of torture, arbitrary arrests, enforced disappearances, harassment as well as attacks against human rights defenders, members of the opposition and environmental rights activists.”

That statement followed a strong declaration Friday from the U.S. that cited “recurring credible accounts” of forced disappearances and torture by the security forces which “reflect poorly” on the government of President Yoweri Museveni, who has held power since 1986.

Fresh criticism of Museveni’s human rights record comes amid torture allegations by local writer Kakwenza Rukirabashaija, who charges that he was tortured for weeks while in detention before a magistrate ordered him freed late last month.

Rukirabashaija has posted photos that show many scars on his back, drawing anger from activists, opposition politicians and others who demand accountability. He lost his bid to retrieve his passport from the courts when a magistrate ruled on Monday that he had not proved an urgent need to travel.

But the writer insists he needs to get better care abroad.

“They started using a pair of pliers and plucked flesh from my thighs and everywhere,” he said in an account to the local Daily Monitor newspaper. “That day I thought I was dying and thought of denouncing my Ugandan citizenship.”

He said he was forced to stand before a camera and apologize to members of the first family.

In a series of tweets late last year, Rukirabashaija described Museveni as an election thief and Kainerugaba as an overweight and “intellectually bankrupt” soldier who hopes to succeed his father as president.

Rukirabashaija, who writes satirical fiction, has been detained twice before over his work highlighting Museveni’s failures. He was last year awarded the PEN Pinter Prize for an international writer of courage.

His case has renewed focus on the alleged excesses of the security forces in enforcing Museveni’s authority.

“The world cannot and must not watch on any longer,” he said.

Museveni, once praised as part of a new generation of African leaders and a longtime U.S. security ally, still has support among many Ugandans for bringing relative stability to the country. He once criticized African leaders who refused to step aside but has since overseen the removal of term limits and an age limit on the presidency in Uganda.