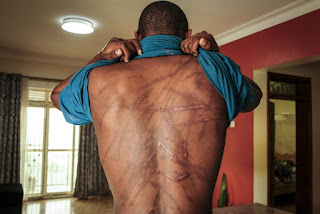 FILE - Kakwenza Rukirabashaija displays scars on his back that he claims were inflicted while he was tortured for weeks in detention, at a house in Kampala, Uganda on Feb. 8, 2022. The prominent writer and government critic who accused Uganda's security forces of torture has gone into exile ahead of his looming criminal trial, his attorney said Wednesday, Feb 9, 2022. (AP Photo/Hajarah Nalwadda, File)
BY RODNEY MUHUMUZA

KAMPALA, UGANDA (AP) — A prominent writer and government critic who accused Uganda’s security forces of torture has gone into exile ahead of a looming criminal trial, his attorney said Wednesday.

Kakwenza Rukirabashaija fled Uganda across the land border with Rwanda and will settle at least temporarily in an unnamed European country, Eron Kiiza told The Associated Press.

“Conditions had become impossible for him,” he said of Rukirabashaija. “They kept surveilling him. They took away his passport. He had no option but to go and save his life.”

Rukirabashaija alleged that he was tortured by officials while in detention, and photographs of his mutilated back shocked many in this East African country. Opposition politicians, activists and others increasingly accuse the security forces — especially the Chieftaincy of Military Intelligence — of torturing suspects in custody.

The international community is also taking notice. The European Union’s delegation to Uganda on Monday issued a statement expressing concern over “a situation that for more than a year has seen a significant increase of reports of torture, arbitrary arrests, enforced disappearances, harassment” and other attacks.

Last week the U.S. cited “recurring credible accounts” of forced disappearances and torture by the security forces which “reflect poorly” on the government of President Yoweri Museveni, who has held power since 1986.

Rukirabashaija alleged that he was a recent victim of torture at the hands of state agents who repeatedly attacked him while in detention. A magistrate ordered him freed late last month but kept his passport as a condition of his bail. He had been in custody for nearly a month.

“They started using a pair of pliers and plucked flesh from my thighs and everywhere,” Rukirabashaija said in an account to the local Daily Monitor newspaper. “That day I thought I was dying and thought of denouncing my Ugandan citizenship.”

Rukirabashaija, who said in court that he needed to have his wounds treated abroad, lost his bid on Monday to regain his passport when a magistrate ruled there was no urgent need for him to travel.

His trial on charges related to offensive communication was due to start in March.

Prosecutors charge that, using Twitter, the writer aimed to “disturb the peace” of Museveni and his son, Lt. Gen. Muhoozi Kainerugaba, who commands Uganda’s infantry forces.

In a series of tweets late last year, Rukirabashaija described Museveni as an election thief and Kainerugaba as an overweight and “intellectually bankrupt” soldier who hopes to succeed his father as president.

Rukirabashaija, who writes satirical fiction, has been detained twice before over his work highlighting Museveni’s failures. He was last year awarded the PEN Pinter Prize for an international writer of courage.

His case has renewed focus on the alleged excesses of the security forces in enforcing Museveni’s authority.

Museveni, once praised as part of a new generation of African leaders and a longtime U.S. security ally, still has support among many Ugandans for bringing relative stability to the country. He once criticized African leaders who refused to step aside but has since overseen the removal of term limits and an age limit on Uganda’s presidency.