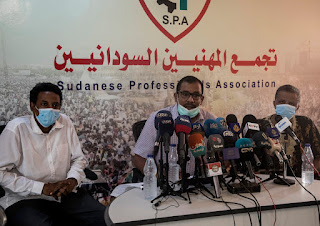 The Sudanese Professionals Association. Image via The Arab Initiatives

CAIRO (AP) — Sudan’s leading pro-democracy group lashed out at the United Nations on Friday, accusing it of failing to safeguard the country’s transition to democracy and being soft on the generals who led last year’s military coup.

The Sudanese Professionals’ Association, which led dozens of protests since the military takeover in October, once again rejected an initiative by the U.N. Mission in Sudan aimed at bringing civilians and the military to the negotiating table.

“Your mission has failed to explicitly condemn the coup,” the group said in a statement. “All your mission’s moves implied a recognition of the coup authorities.”

The coup upended Sudan’s transition to democracy after three decades of repression and international isolation under autocratic President Omar al-Bashir. The African nation has been on a fragile path to democracy since a popular uprising forced the military to remove al-Bashir and his Islamist government in April 2019.

The upheaval in Sudan worsened last month following the resignation of Prime Minister Abdalla Hamdok, who was the civilian face of the transitional government over the past two years.

The prime minister, who was ousted in the October coup only to be reinstated a month later under heavy international pressure, stepped down on Jan. 2 after his efforts to reach a compromise failed.

Friday’s statement came as the U.N. mission continued its consultations to find a way out of the ongoing crisis.

“By including the coup perpetrators, your consultations contradict the aspirations of the Sudanese people in a flagrant way,” the SPA said, addressing Volker Perthes, head of the UN Integrated Transition Assistance Mission in Sudan, or UNITAMS.

In the same statement, the SPA reiterated its opposition to any new talks or partnerships with the military. The group has insisted that the military must withdraw from politics and allow a fully civilian government to lead the transition.

Since the coup, at least 79 people have been killed and hundreds of others wounded in a widely condemned crackdown on protests, according to the Sudan Doctors Committee, a medical group tracking casualties among protesters.

There were also mass arrests of activists leading the anti-coup protests and allegations of sexual violence, including rape and gang rape, in a Dec. 19 protest in Khartoum, according to the U.N.
Africa Arabs Associated Press News Desk Sudan United Nations