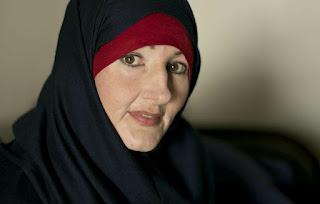 FILE - Kimberly Gwen Polman, a Canadian national, poses for a portrait at camp Roj in Syria, April 3, 2019. Canadian authorities are preventing Polman and a child under age 12, who is not related to Polman, who are detained in a camp in Syria from returning home for life-saving medical treatment, contradicting policies that allow such repatriations, Human Rights Watch, a prominent rights group said Tuesday, Feb. 22, 2022. (AP Photo/Maya Alleruzzo, File)

BEIRUT (AP) — Canadian authorities are preventing a Canadian woman and a child detained in a camp in Syria from returning home to get life-saving medical treatment, contradicting policies that allow such repatriations, a prominent rights group said Tuesday.

Human Rights Watch identified the two “gravely ill” Canadians as Kimberly Polman, 49, and a child under age 12. It withheld further details about the child, who is not related to Polman, including the name and medical condition, to protect their privacy.

There are nearly 50 Canadian nationals stuck in camps in northeastern Syria. Some of them have been held since even before the Islamic State group lost the last sliver of land in its self-declared caliphate in March 2019. More than half of the Canadians are children, most under age 7, HRW said.

They are among tens of thousands of women and children from about 60 countries being held by U.S.-backed Kurdish-led fighters in the camps. Many of them are wives, widows and children of IS fighters,

A few countries have agreed to repatriate their citizens but many others, including Canada, have refused to do so.

The Associated Press met with Polman earlier this month at Roj Camp, where she has been for three years. She looked tired and said she was suffering from kidney disease, high blood pressure and other problems. She said there is one doctor for almost 1,000 women and 3,000 children and no facilities to deal with specific illnesses.

“Women walk around here with conditions that would normally be hospitalized,” she said. “You just get used to being sick here all the time and you just kind of keep going with life, because it’s either that or a huge depression.”

“One day you will come into my tent (and) I will be rocking in a corner … and I am trying not to do that,” she said.

HRW said a former American ambassador who has taken several foreigners out of northeast Syria on behalf of their home countries told the rights group that in days of exchanges ending on Feb. 15, Canadian authorities refused his offer to escort Polman and the child to a Canadian consulate in neighboring Iraq.

“How close to death do Canadians have to be for their government to decide they qualify for repatriation?” said Letta Tayler, associate crisis and conflict director at Human Rights Watch.

A message seeking comment from Canada’s embassy in Beirut was not immediately returned.

The families of the two Canadians have repeatedly implored government authorities to repatriate the woman and child and have sent them medical records attesting to their need for life-saving care.

“Canada should be helping its citizens unlawfully held in northeast Syria, not obstructing their ability to get life-saving health care,” Tayler said.

Despite the fact that Kurdish-led authorities in northeast Syria have called on countries to repatriate their citizens, Canada considers the repatriation of its nationals from Syria a security threat.

However, the Canadian government has said that if its citizens reach a consulate, it will assist them, including if they request repatriation, HRW said.

On Feb. 10, more than a dozen U.N. independent experts called on Canada to urgently repatriate Polman to treat life-threatening illnesses, including hepatitis, kidney disease, and an autoimmune disorder, HRW said.

Polman told the AP she contracted hepatitis four times while in the camp, as well as pneumonia, adding that her kidney disease was probably a result of dirty water.