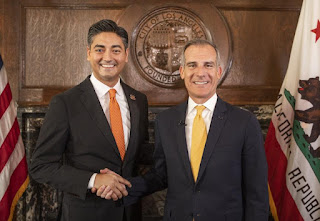 The bet has two parts. The losing mayor will wear the winning team’s jersey at an upcoming public appearance. And the winning mayor will personally contribute to the losing city’s children’s hospital – Children’s Hospital Los Angeles or Cincinnati Children’s – and encourage their constituents to do the same.

“Angelenos fight hard and we win graciously,” said Mayor Eric Garcetti. “We can’t wait to host Super Bowl LVI on Sunday, and when the Rams win, L.A. will show our friends in Cincinnati how much heart we have by chipping in together to help the kids at Cincinnati Children’s.”

“In Cincinnati, we're incredibly proud of our children's hospital,” said Mayor Aftab Pureval. “It provides world class care to both our residents and families across the globe. This is an opportunity to highlight its incredible work. Cincinnati fans are so passionate about the Bengals and our city that I’m confident they will commit themselves with the same passion to this philanthropic effort.”

The wager was inspired by the compassion the Kansas City Chiefs and their fans showed after their dramatic win against the Buffalo Bills in the AFC Championship. After that win, the people of Kansas City banded together to raise hundreds of thousands of dollars for the Buffalo Children’s Hospital. Mayors Garcetti and Pureval will join with their own cities to carry that example forward, and continue leading with compassion and generosity.
Los Angeles News Room NFL