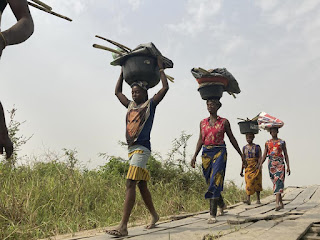 Women and children return from their farmlands after the day's work in Agatu village on the outskirts of Benue State in northcentral Nigeria, Wednesday, Jan 5, 2022. Across northern Nigeria, at least 13 million are now facing hunger amid a lean season, according to the U.N. World Food Program. The violence has also disrupted the sales of food as roads are too unsafe for farmers to transport crops and marketplaces have been razed by attackers. (AP Photo/ Chinedu Asadu)

AGATU, NIGERIA (AP) — It’s 2 p.m. and Hannah Mgbede asks her husband if she can take her first break of the day from threshing rice so she can breastfeed their 18-month-old baby girl fastened to her back during the grueling work.

Her husband Ibrahim Mohammed, 45, used to harvest as many as 10 bags of rice a year from his farm. But that dropped to just three bags after attackers burned his home to the ground a few years ago, as violence between farmers and herders escalated across the northwest and central parts of Nigeria.

With that decreased yield, Mohammed hasn’t made enough money to buy seedlings to grow yams, soybeans and guinea corn (sorghum).

“Sometimes we manage to eat once (a day),” says Mohammed, who has three children, aged five and younger. “Since the crisis, it is only by the grace of God we are feeding to remain alive.”

Here in Benue state, harvests of rice, yams and soybeans were once so bountiful that it was called the “food basket of Nigeria.” But waves of violence over the last several years have reduced crops in the northcentral state of Africa’s most populous nation.

More than 1 million farmers in the state have been displaced because of the intercommunal violence between herders and farmers competing for water and land, say officials.

“We are heading to a food crisis,” Benue state Gov. Samuel Ortom told The Associated Press.

Across northern Nigeria, at least 13 million are now facing hunger amid a lean season, according to the U.N. World Food Program. The violence has also disrupted the sales of food as roads are too unsafe for farmers to transport crops and marketplaces have been razed by attackers.

Rice production has dropped so much that its price has jumped more than 60% in Benue state as well as some other parts of the country.

“There is a very real risk of famine because both conflict and COVID-19 has made it harder to reach those most in need,” a spokesperson of the U.N. agency told AP.

Thousands of Nigerians have been killed in the decades-long clashes between agrarian communities and nomadic cattle herders who are fighting over limited access to water and grazing land. The farmers often accuse the herders of encroaching in their fields while the herders, mostly from the Fulani ethnic group, claim the croplands are their traditional grazing routes.

The government has now launched an initiative under the National Livestock Transformation Plan in the hope of resolving the conflict which has been worsened by the proliferation of arms and the government’s failure to prosecute past perpetrators from both groups.

About 3,000 people who have fled the violence in Benue state are now living at a camp in Guma local government area.

Mtonga Iliamgee, 43, says every day is a struggle to feed her family of 10. She was seen preparing their only meal of the day at 1 p.m.

“We live for the day and we don’t know what tomorrow could bring,” she says.

Felix Agune, the deputy head of the camp school, says some children come to class crying that they’ve had no breakfast. Non-government organizations are trying to fill the gap but it is “nothing compared to the massive hunger spread across Benue state,” said Rex Elanu, a program director for the One to One Healthcare Initiative.

Government officials insist they are working to make farmlands safe enough for people to return and work the land. They’re also trying to encourage nomadic herders to take up ranching so they are less at odds with farmers.

Seeds and fertilizers have also been supplied to farmers in the past to enhance food production, cushion the effect of the pandemic and encourage more youths to go into agriculture, according to a spokesman of the agriculture ministry.

Despite the violence, Nigerian farmers have been able to produce enough crops to keep the country self-sufficient in staples such as rice, cassava and yams.

“Nigeria survived with the produce generated by the smallholder farmers,” Theodore Ogaziechi of the agriculture ministry said. “The farmers are doing their utmost best to feed the nation.”

Farmers are resilient but also afraid because some who have attempted to go back to their farms have been killed, warned Ortom, the governor of Benue state.

“If there is security for these farmers, we’ll continue to retain our position as the food basket of the nation,” he said. “But if nothing is done, as it is now, it is a big challenge.”
Associated Press News Desk Nigeria Turmoil