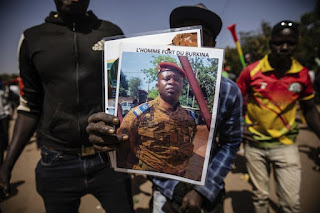 FILE - A man holds a portrait of Lt. Col. Paul Henri Sandaogo Damiba who has taken the reins of Burkina Faso, in Ouagadougou, Jan. 25, 2022. West Africa is grappling with a wave of military coups over the past 18 months that has some wondering which country could be next. (AP Photo/Sophie Garcia, File)
BY SAM MEDNICK

Damiba is to be officially inaugurated on Feb. 16, military officials confirmed Friday, although his term as president is effective retroactively from Jan. 24, when soldiers overthrew the democratically elected former President Roch Marc Christian Kabore.

Damiba has vowed to restore security to the conflict-riddled nation, which is seeing a dramatic increase in attacks by jihadists linked to al-Qaida and the Islamic State group.

Since seizing power Damiba has swiftly appointed new military chiefs, sacked local administrators and vowed to restore Burkina Faso to constitutional rule when the “conditions are right,” he said in a televised address to the nation days after the coup.

Damiba has also met with politicians, including the former administration, civic organizations and representatives of the international community to explain his views and garner support.

Earlier this month, Damiba created a 15-person technical committee charged with proposing a timeline for a transitional government that will lead the country to elections. The committee is expected to announce its proposal on how the country should return to democracy in a few weeks.

While the junta has so far received widespread support from people across Burkina Faso, the international community has condemned the coup. Burkina Faso has been suspended from the West African regional body known as ECOWAS as well as the African Union, which stopped short of imposing sanctions. Both those organizations are calling for a fast transition to constitutional rule and for Kabore to be released. The former president is still under house arrest in the capital, Ouagadougou.