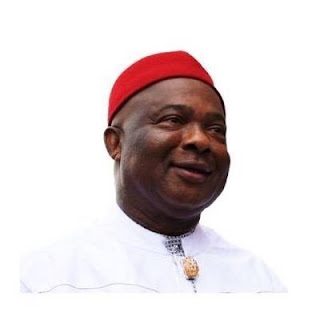 OWERRI (DAILY POST) -- The Indigenous People of Biafra, IPOB, on Monday accused Governor Hope Uzodinma of Imo State of collaborating with security operatives and Ebubeagu to kill innocent people in the state.

IPOB’s spokesman, Emma Powerful, claimed that Uzodinma, alongside the All Progressives Congress, APC, security agents and Ebubeagu, has turned Imo State into an “abattoir for innocent Biafrans.”

Powerful was reacting to reports that soldiers repelled and killed and operatives of the Eastern Security Network, ESN, in the state.


He noted that claims that security operatives repelled ESN operatives who allegedly besieged the palace of Eze Emmanuel Eze Okeke of Amaifeke in Orlu LGA Imo State are blatant lies by Uzodinma and his followers.


A statement by Powerful reads: “We are the Indigenous People of Biafra (IPOB) under the leadership of Mazi Nnamdi KANU. Following the frustration and lack of professionalism by the Nigerian security agencies, they have as usual resorted to lies and propaganda to deceive the gullible minds.

“The Nigerian Army and police parading and killing innocent citizens in Imo State have started with falsehood to demonise their innocent victims. They can only deceive those who don’t know what is happening in Imo State since Hope Uzodinma and his APC party turned Imo State into an abattoir for innocent Biafrans.


“This is another blatant lie from the pit of hell. IPOB/ESN operatives have no issues with traditional rulers in Biafraland but Nigeria army and police are trying to create the wrong impression that we are hunting the monarchs.”
Imo State News Desk Owerri