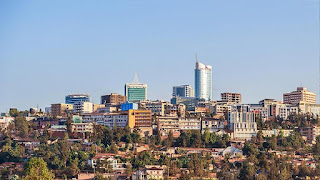 Switzerland topped the ranking, with Japan coming in third, the only other country not in Europe to list in the top 10 safest countries.

Usebounce, a luggage storage app, created the ranking by combining a crime index and a safety index to evaluate where solo travellers would feel safest. These indexes were made using data from Numbeo.

For many people, Rwanda is still associated with the brutal genocide in 1994. But the country has become widely recognised as one of the safest in Africa for some time.

“Rwanda has invested much effort in its national security, by building competent and professional security organs,” the survey noted.

In the capital city Kigali, low levels of crime mean tourists don’t have to worry. In a 2018 Global Law and Order study by Gallup, 88 per cent of Rwandans said they felt safe to walk alone at night, the same figure as in Finland, Slovenia and Tajikistan.


The only places where more people said they felt safe were Singapore, Norway and Hong Kong.
Travel advice for Rwanda

With Rwanda recognised as one of the safest countries in Africa for solo travellers, it’s still worth noting some things to be considerate of while there.

Rwanda’s direct neighbours have experienced a lot of instability that sometimes spills over the borders. UK travel advice reminds potential travellers to be aware that conflicts on the borders with neighbouring countries of the Democratic Republic of Congo and Burundi can flare up without notice.

Buses are a great way to travel around, but make sure to buy tickets direct from the company you are travelling with as touts are known to try and prey on unsuspecting tourists. Similarly, cabs are a safe and reliable way to travel around the city of Kigali.

Homosexuality is legal in Rwanda and there are a number of queer-friendly spots, but there is still not country-wide acceptance and LGBTQ+ people should be conscious of remaining taboos.

And a big no-no is taking pictures of anything related to the government or military such as post offices, banks or border crossings.
When you are there

One of the most exciting things to do in Rwanda is to see the gorillas. To do this you can go on gorilla treks. The Rwandan government has worked to make guided tours safe for both tourists and the animals so it’s important to book one of these if you want to see any of the protected animals.

In a move to help the environment, Rwanda also banned plastic non-biodegradable bags in 2008. Make sure you don’t bring any into the country as you could face a heavy fine. And you wouldn’t want to be that tourist getting into trouble with officials because you had to bring a plastic bag into Rwanda.

Currently due to the pandemic, COVID restrictions are still in place for travellers entering and exiting Rwanda. To curb the spread of the virus, the country has an active curfew between the hours of 10pm and 4am. Tourists must also take a PCR test 72 hours before visiting any of the country’s national parks.
Africa Essay Paul Kagame Rwanda Travel