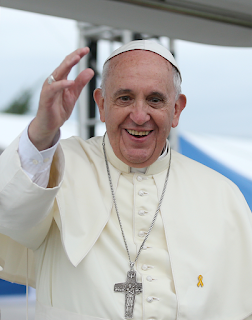 Pope Francis
Overall, an estimated 340 million Christians worldwide face persecution, according to Open Doors’ 2021 report, an increase of 30 million from the previous year.

VATICAN CITY (NATIONAL CATHOLIC REGISTER) — For the first month of 2022, Pope Francis has asked Catholics to pray for those facing religious discrimination and persecution.

“Let us pray that those who suffer discrimination and suffer religious persecution may find in the societies in which they live the rights and dignity that comes from being brothers and sisters,” he said.

The video, which shows scenes of destroyed churches and clips from Pope Francis’ March 2021 trip to Iraq, is promoted by the Pope’s Worldwide Prayer Network, which raises awareness of monthly papal prayer intentions.

Pope Francis’ appeal came amid reports of rising persecution of Christians around the world.

Iraq and Syria, described as having “extreme” levels of Christian persecution, are numbers 11 and 12 on the list, respectively.

Overall, an estimated 340 million Christians worldwide face persecution, according to Open Doors’ 2021 report, an increase of 30 million from the previous year.

Agenzia Fides reported last month that 22 Catholic missionaries were killed in 2021, half of them in Africa.

“How can we allow that in this society, which is so civilized, there are people who are persecuted simply because they publicly profess their faith? Not only is it unacceptable; it’s inhuman, it’s insane,” Pope Francis said.

The United States Secretary of State Antony Blinken was criticized last year after Nigeria was removed from a persecution watchlist.

Violence against Christians in Nigeria has reached the level of genocide, according to some Christian leaders, as Christians are threatened by Fulani militants, the militant group Boko Haram, and the Islamic State West Africa Province (ISWAP).

An average of 10 Christians per day are killed in the West African country. Attacks on villages and atrocities against women and children are often committed with impunity.

In the prayer video, Pope Francis emphasized that religious freedom does not mean simply the freedom to hold a worship service on a particular day of the week, but also appreciating others’ differences and accepting them as true brothers and sisters.

“As human beings, we have so many things in common that we can live alongside each other, welcoming our differences with the joy of being brothers and sisters,” he said.

He prayed that even large differences, such as religion, would not obscure unity.

“Let us choose the path of fraternity. Because either we are brothers and sisters, or we all lose,” the Pope said.
News Desk Pope Francis Religion Rome