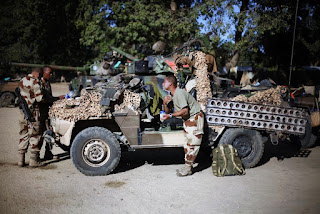 FILE - French foreign legionnaires get ready in Niono, some 400 kms (300 miles) north of the capital Bamako, Jan. 20, 2013. Mali's ruling junta Monday Jan. 31, 2022, told the French ambassador to Mali to leave the country amid mounting tensions between Mali and international partners. The move raises questions about a French-led anti-terrorist military operation present in Mali at the request of Malian leaders. (AP Photo/Jerome Delay, File)

BY BABA AHMED AND ANGELA CHARLTON

BAMAKO, MALI (AP) — Mali’s ruling junta on Monday ordered the French ambassador to leave the West African country, accusing France of undermining its legitimacy amid mounting tensions between Mali and its African neighbors and European partners.

The action puts into question a French-led anti-terrorist military operation present in the region at the request of Malian leaders. It also comes amid growing European concerns about the presence of Russian mercenaries in Mali, a former French colony.

A French diplomat said the French government took note of Mali’s decision to expel the ambassador, and reiterated France’s commitment to the stabilization and development of the Sahel region, without elaborating. The diplomat spoke on condition of anonymity to discuss the sensitive diplomatic situation.

This latest episode in the diplomatic crisis between Mali and its foreign partners comes days after the Malian government ordered Danish soldiers deployed in the French-led Takuba military operation to leave Mali. Also earlier this month, regional group ECOWAS imposed sanctions on Mali, and Mali’s leaders expelled its representative from the country.

Tensions between Mali and its European and regional allies have been mounting in recent weeks, as Mali’s interim leader Col. Assimi Goita has delayed elections until 2026, solidified his control and showed reluctance to uphold Mali’s international agreements.

“This measure follows the hostile and outrageous comments made recently by the French Minister of Europe and Foreign Affairs and the recurrence of such comments by the French authorities with regard to the Malian authorities,” the statement added.

The statement didn’t specify which French comments it was referring to.

French Foreign Minister Jean-Yves Le Drian said last week that Mali’s junta is “illegitimate and takes irresponsible measures.” French government ministers have said in recent days they want to keep troops in Mali, but have called for discussions with Mali’s leaders and regional powers on the conditions for them to stay.

Malian Foreign Minister Abdoulaye Diop said on Malian television Monday night that the ambassador would be welcome to return if the French government clarifies it position toward the transitional government.

He said unspecified comments by French officials were “unacceptable” because they “questioned the legality and legitimacy” of Mali’s current leaders. “This is a difficult situation, because you cannot be accredited to authorities that you yourselves don’t recognize,” he said.

“France is the only country in a posture of direct attack against the legality and legitimacy of the transitional authorities,” he said. “We have a dispute on a political level with France, that doesn’t concern French citizens or French businesses here, and French people remain welcome in Mali. We remain open to dialogue with France.”

Since a second coup in May 2021 and the arrival of Prime Minister Choguel Maiga, tension has grown between the transitional authorities in Mali and the French government. The situation worsened after some European countries, including France, expressed concern that Mali’s interim government has accepted the presence of Russian security contractors from the Wagner Group on its territory.

Last month, the EU slapped sanctions on eight people and three oil companies linked to Wagner, which is accused of rights abuses in the Central African Republic, Libya and Syria.

Mali has been battling an Islamic insurgency in the north since 2012, and in 2013 France intervened to stop jihadists who had seized swaths of the sprawling country, also at the request of Malian leaders.