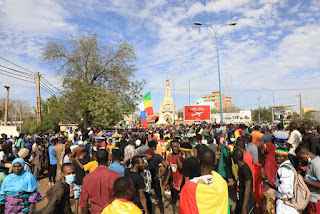 Friday’s demonstration at Bamako’s Independence Square drew Mali’s prime minister and other ministers in the transitional government, which is headed by Col. Assimi Goita, who installed himself as president following a second military coup last year.

Demonstrators shouted: “Down with imperialism, down with ECOWAS, down with France.”

While previous sanctions had targeted members of the ruling junta and their families, the new measures effectively freeze the Republic of Mali’s assets in commercial banks. Most ECOWAS members also have stopped all air traffic to and from Bamako, though Mali has found an ally in neighboring Guinea — also led by a military coup leader.

Air France too has halted traffic to Bamako, and those who have opposed France’s military role in Mali over the past nine years also accused the former regional colonial ruler of orchestrating some of the harsh ECOWAS response. France maintains strong economic and military ties with many of Mali’s neighbors more than 60 years after colonial rule ended in West Africa.

“These sanctions will have no consequences for Mali. France has betrayed us and we call on our authorities to break off diplomatic relations with France,” said Jamille Bittar, a Malian politician who supports Goita’s government.

Goita has reassured Malians on national television that the country won’t suffer supply chain woes because of the border closures. The ECOWAS restrictions do not apply to critical consumer goods including fuel, medicine and supplies for the COVID-19 response.

Goita insists that it’s impossible to organize elections as originally promised because of the deepening insecurity. Islamic extremists have expanded their reach far into central Mali over the past decade, frequently targeting Malian soldiers and U.N. peacekeepers.

But critics of his regime say that it’s a thinly veiled effort to extend his time in power by four more years, giving him time to help shape the election process and ultimately its outcome. The ECOWAS leader sharply denounced the new timeframe, saying it “simply means that an illegitimate military transition government will take the Malian people hostage during the next five years.”

After nine years of bolstering security in its former colony, France has begun a reduction of its troop presence in Mali and critics fear that their departure will only add to the chaos.
Africa Associated Press France Mali News Desk West Africa