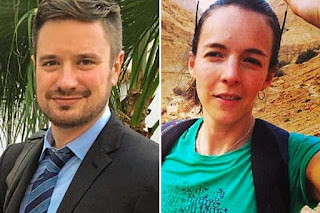 BY JEAN-YVES KAMALE AND CARLEY PETESCH

The President of the Kasai Occidental Military Court, Brig. Gen. Jean-Paulin Ntshayokolo said Saturday that of the 54 defendants, one officer is sentenced to 10 years for violating orders and two others were acquitted.

Those sentenced to death will serve out life sentences, as Congo has observed a moratorium on the death penalty since 2003.

Sharp of the United States and Catalan of Sweden were assassinated on March 12, 2017 in the Kasai Central region while on a field visit with representatives of Kamwina Nsapu, a militia active in Kasai whose customary chief Jean-Pierre Mponde was killed by Congolese army troops in August 2016.

Sharp, the panel’s coordinator and expert on armed groups, and Catalan, a humanitarian expert, embarked on the field visit from Kananga, the provincial capital of Kasai Central, toward the locality of Bunkonde. The two U.N. experts were investigating the violence in Kasai on behalf of the U.N. Security Council. Their bodies were then found in a shallow grave two weeks later

The Congolese government obtained a cellphone video showing them being killed and blame members of the Kamwina Nsapu militia.

Col. Jean de Dieu Mambweni was sentenced to 10 years Saturday of failing to assist a person in danger. No other military leaders were sentenced.

The military court, however, acquitted journalist Trudon Raphaël Kapuku and police officer Honoré Tshimbamba. Both were arrested separately in 2018 and have spent 4 years in prison.

Thomas Fessy, Human Rights Watch’s senior researcher on Congo, said that despite the verdicts, there are still more questions than answers nearly five years after these murders.

“The investigation and ultimately this trial have failed to uncover the full truth about what happened. Congolese authorities, with U.N. support, should now investigate the critical role that senior officials may have played in the murders,” he said via Twitter.

“Crucial that investigation concerning others involved continues to further uncover truth and bring justice. We encourage authorities to fully cooperate with the U.N. mechanism,” she said via Twitter.