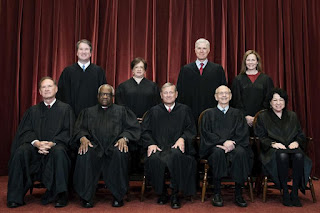 His pragmatism, encyclopedic knowledge, and varied government experience have enriched the Court’s deliberations. And his fanciful hypotheticals during oral argument have befuddled counsel and colleagues alike. ... He is also a reliable antidote to dead airtime at our lunches, moving seamlessly from modern architecture to French cinema, to old radio shows, to a surprisingly comprehensive collection of riddles and knock-knock jokes.

When Justice Breyer arrived at the Court almost thirty years ago, we gained a wonderful colleague. As he retires from active duty on the Court, he and Joanna will always be two dear friends. It has been an absolute joy to have spent these years with them, from sitting next to each other on the bench for over twenty-five years to visiting with them in New England.

He has been a delightful colleague — brilliant, erudite, friendly, good-natured, and funny. I will miss his unique questions at argument, his valuable contributions at conference, his insightful opinions, his amusing observations at lunch, and our many fascinating conversations on a wide range of subjects.

He is brilliant, passionate about the law, and dedicated to the Court. He is funny, optimistic, and giving. We all will miss his commitment to seeking consensus and ensuring collegiality in all we do.

I’ll miss Steve Breyer every day after he has left the Court. He is a brilliant and wise judge whose vision of law will remain of great importance. He is the best possible colleague. He believes in making institutions work; to strengthen this one, he listens to other views with care and generosity, and does everything he can to find common ground. And he is the best possible friend. He is kind and warm and funny. He has boundless optimism and a great heart. I can hardly imagine the Court without him.

For more than 40 years, Justice Breyer has served the Judiciary with integrity and grace. His deep knowledge of our law, its history, and our government is profound. His good humor is legendary. I will very much miss his wisdom — and his wit — at our conference table.

Steve Breyer is a scholar and gentleman, an independent judge and fierce patriot, a man of great wisdom and humor, a collegial consensus-builder and unfailing optimist. He understands how government works for the people, and he has always strived to make it work better, in a good-faith and nonpartisan way. He has sought to stand in the shoes of others and to understand their perspective.

I admire Steve Breyer for many reasons, not least of which is his judicial temperament. Steve feels passionately about the law, as his many writings reflect. Yet his passion never manifests itself in anger. Both in print and in person, Steve aims to persuade through exuberance rather than bite. He is a model of civility.
Democracy News Room The Associated Press United States