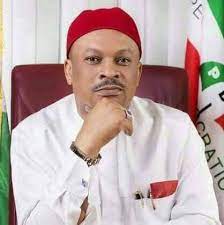 He said Nigerians, especially the youths will have no option than to leave for Ghana if APC returns to power after President Muhammadu Buhari’s administration.

Senator Anyanwu, who was a member of the 8th Senate, expressed regret that the APC government had only worsened the suffering of Nigerians, after using Chibok girls to blackmail Jonathan’s administration out of power in 2015.

The party scribe, who stated this at his country home in Ikeduru Council area of Imo State while fielding questions from journalists, expressed the readiness of the party to reclaim the country from the All Progressives Congress (APC) in 2023

He said, “under the current APC administration, Nigerians are going through economic and political trials. Every sector in the country has collapsed. Aside hunger, starvation and high cost of food items, Nigerians are still hiding from kidnappers or unknown or known gunmen.”

Anyanwu, who represented Imo East Senatorial District under the PDP went on to state that if President Muhammadu Buhari and APC did not leave office in 2023, nothing good should be expected from the administration.

Anyanwu said the only thing Nigerians are asking for is a smooth transition of results from the polling units but because the APC wants to rig the general election in 2023, they have refused to do the needful.

He said Nigeriains shouldn’t expect much from a party with too many factions being manned by a state governor.

He said more factions will emerge in Imo APC and at the Federal level before March 2022, “because they are not together. Nigerians will resist APC, in Imo State, because they are standing on the neck of the people,”

He urged Nigerians not to lose hope over the present challenges confronting the country, assuring them of PDP’s readiness to rescue and rebuild the nation when it takes over power.

He said the APC government had lowered the bar of governance in the State and the country.

He described Nigeria as the most indebted country in the world.

“There is a seriously high level of corruption in the country today under the APC led administration,” he lamented.
Imo State News Desk News Room Nigeria Owerri