Retired General Warns The U.S. Military Could Lead A Coup After The 2024 Election 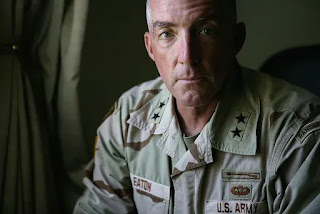 WASHINGTON (NPR) --As the anniversary of the insurrection at the U.S. Capitol approaches, three retired U.S. generals have warned that another insurrection could occur after the 2024 presidential election and the military could instigate it.

The generals – Paul Eaton, Antonio Taguba and Steven Anderson – made their case in a recent Washington Post Op-Ed. "In short: We are chilled to our bones at the thought of a coup succeeding next time," they wrote.

Below are the highlights of the conversation.

Edited for brevity and clarity.
How could a coup play out in 2024?

The real question is, does everybody understand who the duly elected president is? If that is not a clear cut understanding, that can infect the rank and file or at any level in the US military.

And we saw it when 124 retired generals and admirals signed a letter contesting the 2020 election. We're concerned about that. And we're interested in seeing mitigating measures applied to make sure that our military is better prepared for a contested election, should that happen in 2024.
How worried is he on a scale of 1 to 10?

I see it as low probability, high impact. I hesitate to put a number on it, but it's an eventuality that we need to prepare for. In the military, we do a lot of war-gaming to ferret out what might happen. You may have heard of the Transition Integrity Project that occurred about six months before the last election. We played four scenarios. And what we did not play is a U.S. military compromised – not to the degree that the United States is compromised today, as far as 39% of the Republican Party refusing to accept President Biden as president – but a compromise nonetheless. So, we advocate that that particular scenario needs to be addressed in a future war game held well in advance of 2024.
Can the current Pentagon leadership handle it?

I'm a huge fan of Secretary [of Defense Lloyd] Austin, a huge fan of the team that he has put together and the uniformed military under General Milley. They're just superb. And I am confident that the best men and women in the U.S. and in our military will be outstanding. I just don't want the doubt that has compromised or infected the greater population of the United States to infect our military.
What should the military do?

I had a conversation with somebody about my age and we were talking about civics lessons, liberal arts education, and the development of the philosophical underpinnings of the U.S. Constitution. And I believe that bears a re-teach to make sure that each and every 18-year-old American truly understands the Constitution of the United States, how we got there, how we developed it and what our forefathers wanted us to understand years down the road. That's an important bit of education that I think that we need to re-address.

I believe that we need to wargame the possibility of a problem and what we are going to do. The fact that we were caught completely unprepared – militarily, and from a policing function – on January 6, is incomprehensible to me. Civilian control of the military is sacrosanct in the U.S. and that is a position that we need to reinforce.
Are civics lessons 'weak tea' to stave off an insurrection?

A component of that – unsaid – is that we all know each other very well. And if there is any doubt in the loyalty and the willingness to follow the Oath of the United States, the support and defend part of the U.S. Constitution, then those folks need to be identified and addressed in some capacity. When you talk to a squad leader, a staff sergeant, a nine man Rifle Squad, he knows his men and women very, very well.
News Desk United States Washington Post