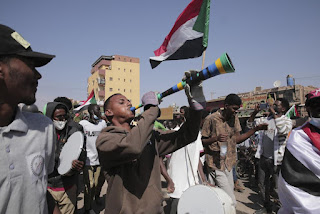 People take part in a protest against the October military takeover and a subsequent deal that reinstated Prime Minister Abdalla Hamdok but sidelined the movement in Khartoum, Sudan, Sunday, Dec. 25, 2021. (AP Photo/Marwan Ali)

CAIRO (ASSOCIATED PRESS) — Sudanese took to the streets in the capital of Khartoum and elsewhere across the country for mass protests Sunday against an October military takeover and a subsequent deal that reinstated Prime Minister Abdalla Hamdok but sidelined the movement.

The demonstrations mark the third anniversary of the uprising that eventually forced the military removal of longtime autocrat Omar al-Bashir and his Islamist government in April 2019.

Sudan then followed a fragile path toward democracy and ruled by a joint military-civilian government. The October 25 coup has rattled the transition and led to relentless street protests.

Video footage circulated online purported to show protesters marching in the streets of Khartoum and its twin city of Omdurman on Sunday. Protesters were seen waving the Sudanese flag and white ones with printed images of those killed in the uprising and ensuing protests.

Ahead of the demonstrations, Sudan’s authorities tightened security across the capital, barricading government and military buildings to prevent protesters from reaching the military’s headquarters and the presidential palace. They also blocked major roads and bridges linking Khartoum and Omdurman across the Nile River.

Security forces used tear gas to disperse protesters headed toward the palace on the bank of the Blue Nile in the heart of Khartoum, according to activist Nazim Sirag. There were no immediate reports of causalities.

There were also protests in other cities including in Atbara, the birthplace of the uprising against al-Bashir.

The protests were called by the pro-democracy movement that led the uprising against al-Bashir and stuck a power-sharing deal with the generals in the months that followed his ouster.

Relations between the generals and the civilians in the transitional government were shaky and capped by the military’s Oct. 25 takeover that removed Hamdok’s government.

Hamdok was reinstated last month amid international pressure in a deal that calls for an independent technocratic Cabinet under military oversight led by him. The agreement included the release of government officials and politicians detained since the coup.

Talks are underway to agree on what Gen. Abdel-Fattah Burhan, head of the ruling Sovereign Council, described as a “new political charter” focused on establishing a broader consensus among all political forces and movements.

Addressing Sudanese late Saturday ahead of the protests, Hamdok said he stuck the Nov. 21 deal with the military mainly to prevent bloodshed. He warned that the country could slide further into chaos amid uphill economic and security challenges.

“Today, we are facing a retreat in the path of our revolution that threatens the country’s security and integrity,” Hamdok said, adding that the agreement was meant to preserve achievements his government made in the past two years, and to “protect our nation from sliding to a new international isolation.”

“The deal, in my view, is the most effective and inexpensive means to return to the course of civic and democratic transition,” he said.

Hamdok urged political parties and movements to agree on a “national charter” to complete the democratic transition and achieve peace with rebel groups.

The pro-democracy movement has meanwhile insisted that power be handed over to a civilian government to lead the transition. Their relentless protests follow the slogan: “No negotiations, no compromise, no power-sharing” with the military.

The list of demands also includes restructuring the military and other security agencies under civilian oversight and disbanding militias. One is the Rapid Support Forces, a paramilitary force that grew out of janjaweed militias and is accused of atrocities during the Darfur conflict and most recently against pro-democracy protesters.

The continued protests since the coup have increased pressure on the military and Hamdok, who has yet to announce his Cabinet.

Security forces used violence, including firing live ammunition at protesters, in the past round of demonstrations, according to activists. At least 45 people were killed and hundreds wounded in protests triggered by the coup, according to a tally by a Sudanese medical group.
Associated Press News Desk Sudan