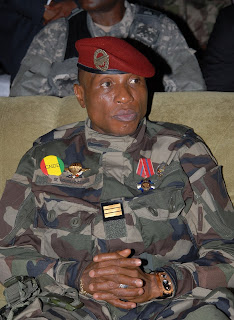 CONAKRY, GUINEA (AP) — The man who led a 2008 coup in Guinea and whose brief rule was marked by a stadium massacre against peaceful demonstrators returned to the West African country Wednesday after more than a decade in exile in Burkina Faso.

Moussa “Dadis” Camara left the country in December 2009 after narrowly surviving an assassination attempt carried out by one of his own bodyguards. For years the government had sought to prevent his homecoming, fearing it could stoke political instability.

However, another coup earlier this year in Guinea put a military junta in power that was more amenable to Camara’s return.

Camara’s plane touched down Wednesday at the airport in Conakry.

Camara, now 57, was a little-known army captain when he seized power in Guinea in December 2008 just hours after the death of longtime dictator Lansana Conte had been announced on state television.

By the following September, opposition to the ruling junta had deepened. And during a peaceful anti-junta demonstration that month at a soccer stadium, Camara’s soldiers fired upon the crowd, killing at least 157 people, according to U.N. figures.

It remains unclear whether Camara could face criminal charges in connection with the massacre. However, to date, no trial has ever been held for the perpetrators of the violence, during which dozens of women also were gang-raped, according to human rights groups.

Camara’s exile after he was shot in the head eventually paved the way for Guinea’s first democratic elections since independence from France, which put Alpha Conde in power.

The ex-coup leader did manage to make a brief visit to Guinea in 2013 to attend his mother’s funeral, crossing at a land border with Liberia. But Guinean authorities have resisted Camara’s permanent return, fearing it could stoke political tensions.

When Camara tried to visit Conakry in 2015, Conde forced him to deplane on a layover in Abidjan before the commercial flight could continue to Guinea’s capital.

Now Conde has been forced from power by another military junta and remains in their custody. First elected in the landmark 2010 vote, Conde saw his popularity sink over the decade he was in power, particularly after he ran for a third term and said term limits did not apply to him. He ultimately won re-election in October 2020, only to be deposed in the military coup less than a year later.