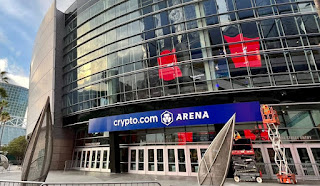 In a Tuesday announcement, Crypto.com said it had partnered with the Los Angeles soccer team in an effort to increase the awareness of and access to crypto, blockchain and Web 3.0 among Angelenos, soccer fans and the athletes themselves. The exchange said it plans to continue looking for “unique and impactful ways” to invest in L.A., with the partnership aimed at encouraging “financial education, independence and financial empowerment” for women.

“Given the speed with which Web 3.0 and cryptocurrency is changing our world, we want to ensure that women are being brought along on the journey as investors and creators,” said Angel City Football Club co-founder and president Julie Uhrman. “We are excited to work with [Crypto.com] to educate our community and players on crypto and allow our players to use the power of NFTs to connect with and create a deeper relationship with their fans.”

The partnership is the crypto exchange’s latest expansion into Los Angeles. Crypto.com announced in November that it had secured the naming rights to the city’s multi-purpose Staples Center for 20 years in a $700 million deal. The venue — expected to officially change names on Saturday — has been home to the NBA’s Los Angeles Clippers and Los Angeles Lakers, as well as the NHL’s Los Angeles Kings and the WNBA’s Los Angeles Sparks.

As it grows, Crypto.com has been partnering with high-profile individuals and companies to promote cryptocurrencies and blockchain. In July, the company signed a $175-million sponsorship agreement with the Ultimate Fighting Championship. Actor Matt Damon also appeared in ads released around the world beginning in October.