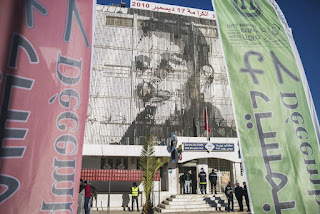 An image of Mohammed Bouazizi is depicted on the facade of the post office building, in Sidi Bouzid, Tunisia, Friday, Dec. 17, 2021. President Kais Saied changed the anniversary date of Tunisia's 2011 revolution – when former autocratic ruler Zine el Abidine Ben Ali fled the country – to Dec. 17 to mark the day in 2010 when fruit seller Mohammed Bouazzi set himself alight, setting off the series of uprisings in Tunisia that led to what is now known as the Arab Spring.in Sidi Bouzid, Tunisia, Friday, Dec. 17, 2021. (AP Photo/Riadh Dridi)

TUNIS, TUNISIA (AP) — Official observances took place at the birthplace of Tunisia’s 2011 revolution, while opponents and supporters of the country’s president held rival demonstrations in the capital Friday, the new date the leader chose to mark Revolution Day.

A few hundred demonstrators gathered in Tunis on Friday morning to protest Tunisian President Kais Saied’s consolidation of power over the summer and his subsequent actions that have raised fears of democratic backsliding.

A smaller counter-protest in support of the president was held nearby.

Saied announced Monday, almost five months after his power grab, that he would prolong the suspension of parliament until an election in December next year. He also set a date for a national referendum on political reform for July 25, exactly a year since Saied took on sweeping powers.

The president’s opponents slammed his announcement.

The secretary-general of the country’s main trade union, the UGTT, said Saied’s announcement did not address the country’s economic and social problems. The coronavirus pandemic exacerbated Tunisia’s deteriorating economy, and the country has an 18% unemployment rate.

Following nationwide antigovernment protests in July, Saied abruptly froze parliament, dismissed his government and assumed greater executive powers. In September, he partially suspended the country’s post-revolutionary Constitution and gave himself the power to rule by decree.

Though Saied’s measures have proven popular, welcomed by a public weary of political elites and economic turmoil, critics say Saied’s actions amount to a coup.

Among Saied’s recent announcements was his decision to move the country’s official Revolution Day from Jan. 14 – commemorating the date when former autocrat Zine el Abidine Ben Ali fled the country amid unprecedented mass protests – to Dec. 17.

The new date marks the day in 2010 when fruit seller Mohammed Bouazizi set himself on fire in frustration over corruption, joblessness and repression. His desperate act set off an uprising across Tunisia that spread to other countries in what became known as the Arab Spring.

In the decade since, an annual celebration has always been held on Dec. 17 in Sidi Bouzid, Bouazizi’s hometown and the site of the revolution’s first protests.
Africa African Union AP Tunisia