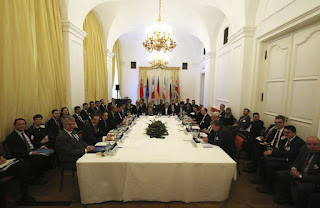 VIENNA (AP) — Iran has nearly tripled its stockpile of enriched uranium since November in violation of its deal with world powers and is refusing to answer questions about three possible undeclared nuclear sites, the U.N. atomic watchdog agency said Tuesday.

The International Atomic Energy Agency made the statement in a confidential report distributed to member countries that was seen by The Associated Press. The agency said as of Feb. 19, Iran’s total stockpile of low-enriched uranium amounted to 1,020.9 kilograms (1.1 tons), compared to 372.3 kilograms noted in its last report on Nov. 3, 2019.

The current stockpile puts Iran within reach of the amount needed to produce a nuclear weapon, which it insists it does not want to do.

The nuclear deal that Iran signed in 2015 with the United States, Germany, France, Britain, China and Russia, known as the Joint Comprehensive Plan of Action, allows Iran only to keep a stockpile of 202.8 kilograms.

The JCPOA promised Iran economic incentives in return for the curbs on its nuclear program, but since President Donald Trump pulled the U.S. out of the deal unilaterally in 2018, Iran has been slowly violating the deal’s restrictions. With the violations, Tehran has said it hopes to put pressure on the other nations involved to increase economic incentives to make up for hard-hitting sanctions imposed by Washington after the American withdrawal.

In a second report issued Tuesday, the IAEA said it had identified three locations in Iran where the country possibly stored undeclared nuclear material or undertook nuclear-related activities without declaring it to international observers. It said it had sent questions to Iran in three separate letters but received no answers.

According to the Washington-based Arms Control Association, Iran would need roughly 1,050 kilograms of low-enriched uranium — under 5% purity — and would then need to enrich it further to weapons-grade, or more than 90% purity, for a weapon.

With the nuclear deal in place, Iran’s so-called “breakout time” — the period Tehran would need to build a bomb if it choose — stood around a year. As Iran has stepped away from the limits of the 2015 nuclear deal, it slowly has narrowed that window.

However, that doesn’t mean that Iran would immediately rush toward a bomb if all materials were in place.

Prior to the nuclear deal, Iran enriched its uranium up to 20%, which is just a short technical step away from weapons-grade levels of 90%. In 2013, Iran’s stockpile of enriched uranium was already over 7,000 kilograms with higher enrichment, but it didn’t pursue a bomb.

Iran has been violating other restrictions in the JCPOA, including the stock of heavy water it is allowed and the number and type of centrifuges it operates.

It has announced the violations as they have occurred, and allowed IAEA inspectors access to verify them. Iran has also said the measures are all reversible if it gets the economic incentives it needs.

“Iran is increasing its stockpile of the enriched uranium with full speed,” he said.

So far, the pressure from Iran has failed to produce the economic incentives from the JCPOA countries that Tehran has hoped for.

The European nations involved in the deal — Germany, France and Britain — in January invoked a dispute resolution mechanism, designed to resolve issues with the deal or refer them to the U.N. Security Council, which could result in a “snap-back” of international sanctions.

The three sites in Iran cited by the U.N. agency where nuclear activities were thought to be date from before the JCPOA was signed. They come in addition to one outside Tehran where the IAEA had previously said that uranium particles of man-made origin had been discovered and had not been declared, which appeared to confirm allegations made by the U.S. and Israel about Iran having a secret nuclear warehouse.

The agency said Tehran responded to its latest concerns in a letter on Jan. 28 that “Iran will not recognize any allegation on past activities and does not consider itself obliged to respond to such allegations.”

The IAEA responded that its requests for clarification were in line with Iran’s broader commitment to allow inspections of its nuclear facilities and were not tied into the JCPOA provisions.