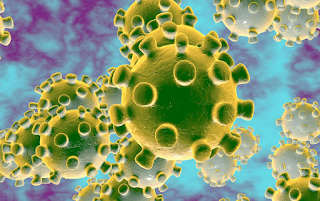 JOHANNESBURG, SOUTH AFRICA (BLOOMBERG) -- South Africa’s President Cyril Ramaphosa declared a national state of disaster to combat the spread of the coronavirus as his counterparts in sub-Saharan Africa took similar steps to curb the threat in a region that accounts for only 1% of global health-care spending.

Ramaphosa’s measures ranged from halting flights from nations struggling to control the virus, closing 35 of the country’s 53 land border posts, banning gatherings of more than 100 people and shutting schools from March 18. He also said the government plans economic interventions, without giving details.

“This situation calls for an extraordinary response. There can be no half measures,” he said in a televised speech on Sunday, urging South Africans to cooperate and work together to minimize the impact of the outbreak.

Announcing an updated total of 61 infections, Ramaphosa said there is evidence of transmission within the country for the first time rather than just infections contracted by people who had traveled overseas.

“The greatest danger to our country at this time are fear and ignorance. We cannot allow ourselves to be overwhelmed by fear and panic,” he said.

Slow Spread
While sub-Saharan Africa has so far recorded relatively few local transmissions, most governments are reacting swiftly, banning religious and cultural events and closing schools. About 200 people have so far tested positive for the coronavirus in 24 African countries, almost all recent travelers to Europe or the U.S.

Still, Africa’s economic growth could slow to 1.8% this year from 3.2% as global supply chains are disrupted and investments drop, according to the United Nations Economic Commission for Africa.

Kenya, Ghana, Burundi and Gabon also halted entry of travelers from countries most affected by the disease, while Ivory Coast’s health ministry urged the presidency on Sunday to consider the measure. The four nations will only allow in citizens and foreigners with residence permits provided they go into quarantine upon arrival. Other countries, including Mali and Botswana, stepped up screening of travelers at airports and land borders.

Large public and private events have been banned in a range of West African nations, with Senegalese President Macky Sall canceling the country’s most important religious festival due to take place later this month following a surge in cases to 24 from 10. That includes 17 contacts of a Senegalese national who recently returned from Italy.“I call on my African colleagues to act together,” Sall said on Twitter. “Africa must not be the new focus of the disease.”Senegal, Rwanda and Namibia instructed schools and universities to close, while Kenya is shutting primary and secondary schools from Monday and universities by Friday.In Guinea, President Alpha Conde banned all large gatherings even as his administration prepares to hold a controversial referendum on March 22 to change the constitution. Conde didn’t say whether the referendum will go ahead. Burkina Faso said last week it’s reviewing the use of public bathhouses and Gabon has closed bars and nightclubs.

To contact the editors responsible for this story: John McCorry at jmccorry@bloomberg.net, Antony Sguazzin